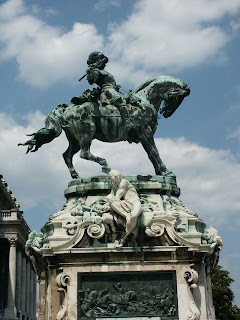 It is entirely possible that some readers will show their displeasure at the fact that I have posted a picture of Eugene of Savoy at the start of a piece about Turkey, he being the general who defeated the Ottomans once or twice. This statue celebrates the Battle of Zenta of 1697 and stands above the Danube, in front of Buda castle. As he looks out, Prince Eugene commands a very fine view (though not as fine as the views in Yorkshire).

It was a short piece on American Thinker that led me to think of Prince Eugene. It seems that Turkish Foreign Minister Abdullah Gul was irritated by a farewell present to retiring (and not a moment too soon) President Chirac from Chancellor Merkel. It seems the antique beer mug was decorated by illustrations from a French victory over the Ottomans.

Thomas Lifson is rightly disdainful about the Turkish huffing and puffing:

Gull [sic] should understand that we are free to celebrate our victories. Americans celebrate our Revolutionary War from Britain with nary a peep from our Brit cousins. The French celebrate their victory at Austerlitz with a railway station, and Germany doesn't object. I have to wonder if Turkey might not celebrate a victory or two.

Very true, I thought, seething again at the thought of an inscription I read to a picture in the Royal Academy's "Turks" exhibition about the "glorious Szigetvár campaign" in Hungary in the sixteenth century. Glorious? It was a national tragedy, lightened merely by the heroism of the defenders, all but a handful of whom were killed.

And right again about Brits not minding too much about the Revolutionary War, not even when seriously misleading films such as "The Patriot" are produced. Though I cannot help thinking that German equanimity about the Battle of Austerlitz may have something to do with the fact that they were not much involved, it being the "Battle of the Three Emperors": Napoleon, Francis I of Austria (then still the Holy Roman Emperor Francis II) and Alexander I of Russia.

What rather puzzled me was the French victory over the Ottomans. I looked up the history of the Ottoman Empire in the eighteenth century and found several Russo-Turkish wars, which went this way and that (mostly that) and several defeats of the Ottomans by the Austrians under Prince Eugene of Savoy (hence the picture). Of course, some of the defeats were reversed and had to be repeated but, on the whole, events went this way.

Which French victory? Right at the bottom of the list, dear reader, is something I ought to have remembered (mea culpa): 1798 Battle of the Pyramids. Quite so, though, as it was swiftly followed by the Battle of Aboukir and the Siege of Acre, it may not be something the French care to dwell on too much, despite Napoleon's stirring words to his soldiers:

Soldiers, from the heights of these pyramids, forty centuries look down on us.

Still, the Germans could have produced a beer mug with l'empereur making that speech or fighting the mameluk army.

Looking up the original story I found, sadly, that it was all a storm in a tea-cup or beer mug.

The German government said Wednesday the commotion had sprung from a misunderstanding: The mug, manufactured around 1710 in Germany, was adorned with flower ornaments, not a pictorial depiction of a historic war victory.

I wonder which translator was responsible for that little effort and whether he or she is in the Bosphorus yet.

Meanwhile, beer mugs aside, something is stirring on the EU-Turkish front. The negotiations have been resumed with the opening of another chapter, number 20, to be precise, on enterprise and industrial policies, "after the German presidency held emergency talks between Spain, France and the European Commission (EC) on Monday". In fact, this is only the second chapter that has been opened in the negotiations with Turkey, so the ten year long timetable remains over-optimistic.

The question of whether Turkey could or should ever become part of the European Union is very wide, indeed, and starts with a very basic query for the EU: exactly how far does it intend to expand and what is the purpose of that expansion.

On other postings I have argued that the EU is a little like an amoeba (though less useful) in that it can exist only if it enlarges itself. If it is not negotiating the entry of new members it has to deal with all the internal contradictions of its structure as it exists. That would be an intolerable burden for the politicians and theoreticians of integration.

Aydın Dumanoğlu, the co-chairman of the Turkey-EU Joint Parliamentary Commission, expressed the view that the EU and Turkey needed each other, as "the EU needs Turkey as a global actor and Turkey needs the EU as a vision".

It is nice to hear somebody describing the EU as a vision after all these years. It is, however, a vision that has been somewhat tarnished, not least in the eyes of the Turkish people who see a great deal of hostility to themselves (and if their foreign minister goes around making dumb comments, they can expect no other) and in the eyes of the Turkish military, a very important participant, who do not seem to like the idea of having to make choices between European defence strategies and the American alliance.

However, there is one very good reason why the EU needs Turkey. With the Turks inside the tent the European army may well become a reality at last.