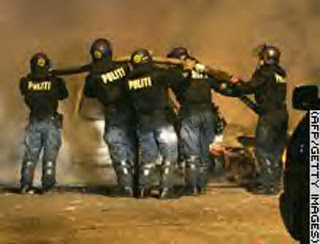 This seems to have nothing to do with either immigrants or the Muslim community enraged by some event or another. Rather it is our old friends, anarchist “activists”, as AP describes them, though what sort of activity they engage in is unclear. Many of us might call them lay-about welfare scroungers and whingers but that would be unkind.

It all started with the Danish police evicting squatters two days ago from a house in Copenhagen that had been bought by a Christian organization six years ago. Who the new owners are is actually irrelevant. They are the owners and they would like to use their property.

Since then Copenhagen had two nights of riots and around 400 people have been arrested, 188 of them on Friday night. The Danish anarchists and “activists” have summoned their friends from other European capitals, who either went to Copenhagen to help or organized demonstrations of sympathy in their own countries, Germany, Norway, Sweden and Finland.

Last heard of there were renewed, this time peaceful demonstrations on Saturday afternoon but the police was braced for more violence.

One little lad, aged 22, who gave his name as Jan, eschewing such bourgeois habits as surnames explained:

This is a display of anger and rage after more than seven years of struggle to keep what is ours.

And it is theirs on what grounds? Did little Jan, who had been going to the house in question for years, actually work, aged 15, to earn money to contribute to the ownership and upkeep of the house, which is, in fact, badly wrecked? I think not.

Meanwhile, Charles Johnson at Little Green Footballs points to another interesting story concerning Denmark and the way it is reported by AP.

Shock horror, they announce, under the title "Cartoons still costing Denmark", Danish exports to Islamic countries have fallen 11 per cent since the publication of those cartoons.

The next paragraph tells us that, actually, exports to countries of the Organization of Islamic Conference represent only 2.5 per cent of all Danish exports, which have, in fact risen by 9 per cent in the last year. (So much, incidentally, for how the country was going to suffer if it stayed out of the euro.)

Even Arla Foods, which suffered most in North Africa and the Middle East, say that sales are bounding back in those areas.

Now, if only they can find a way of making all those anarchist "activists" work.