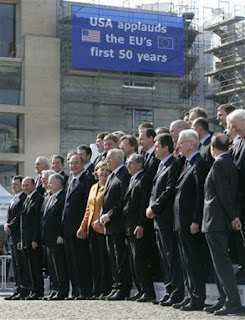 There they are, the "colleagues" lining up in Berlin for the "family photograph", with Mr Blair well in the back row, and what do we see on the wall behind them?

There is no identification as to the donor – who paid for the banner - but it is somehow rather sad that there are still people in the United States who are deluded enough to wish the European Union well (nothwithstanding that it only came into being in 1990).

Still, since one of the main sponsors of European integration back in the 1950s and 60s was the United States – without which it is unlikely that the Treaties of Rome would ever have happened – it was inevitable that American well-wishers should want to applaud their own handiwork.