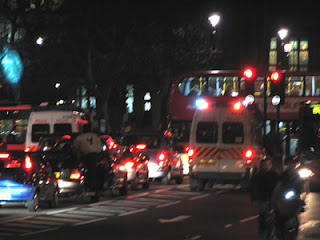 The tussle we had with The Daily Telegraph we had sometime ago about the use of photographs has left its mark, leaving me determined to reduce our dependence on the MSM for illustrations.

It was something of a landmark, therefore, that we were able to illustrate what we believe to be an important news story on the "energy-saving" light bulbs entirely from our own resources, although we did later add one photograph from Ron Elliott's web site, but entirely with his permission, for which I thank him.

It was also with a little pride that we were able to publish our own photographic "scoop" of the demonstration in Parliament Square yesterday morning, entirely independent of the MSM.

As I left it, however, late last evening, the demonstration over the Trident replacement was still in full flight and the snap above shows two Metropolitan Police "serials" rushing to the scene in Parliament Square, blue lights blazing, to reinforce their beleaguered colleagues. 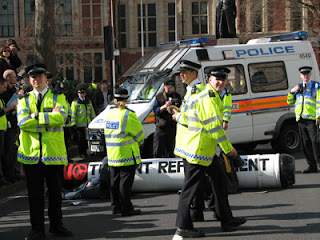 Loathe the police as I do for their general inefficiency, one has to express a certain sympathy for them as, with the utmost of good humour and tolerance, they dealt with the yoghurt knitters as they made their pointless protests while the MPs in the pointy building marched in to cast their votes, the outcome of which was virtually pre-ordained.

You can bet that a similar demonstration across the Channel would have been met with tear gas and water cannon… I've seen it with my own eyes, as the brave Belgian police took on a demonstration of school kids outside the EU parliament with armoured vehicles sporting those famed water cannon.

And neither is this an abrogation of democracy. MPs, who have a keen eye on public sentiment, are able to judge the temperature on specific topics by reference to their voluminous postbags. And, for the vast majority, the Trident replacement, as judged by voter concern, is simply a non-issue (as indeed is global warming).

Anyhow, as I am wont to observe, soundings on the wider issues amongst a certain section of our beloved elected representatives seems to suggest that the Boy has blown it with his obsession with global warming, engendering not a little resentment though placing a "three line whip", demanding the attendance of the whole Conservative front bench at the al-Gore love fest this morning. It is only a determination to play a longer tactical game that prevented a number of shadow ministers tendering their resignations here and now. 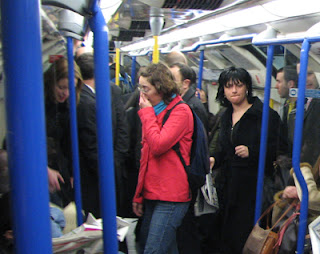 With that, the "tube" to Kings Cross and thence by GNER back home left me plenty of time to reflect that we live in strange times. A few years back, the EU dominated our thinking but now, as my co-editor observed, over a meal in our favourite London restaurant, it seems a distant irrelevance. It is merely a noxious irritant, filed under "unfinished business" that sooner or later must be sorted out, when our politicians finally realise that it offers nothing and costs us a fortune.

Certainly, for all its pretensions, the EU featured not in Parliament Square today, nor in the votes in the real Parliament. In a vain attempt to prove its relevance, the "colleagues" are driven to arrange facile celebrations in Berlin in a hopelessly inadequate attempt to cultivate popular support. 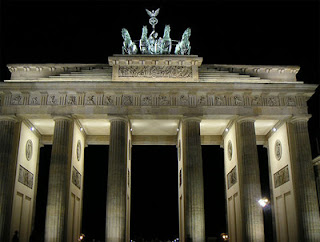 You can almost taste the desperation in the statement of an unnamed German government official who tells us that, "We want to create a party atmosphere and awaken curiosity in Europe," adding, "It's a public celebration and we want to remind people of the big idea."

But, when all the German presidency has to offer, by way of celebrating the fiftieth anniversary of the Treaty of Rome, is an all-night clubbing extravaganza, in which ravers can hop between 35 Berlin nightclubs for an EU-subsidised 12 euros (£8), complete with "free bratwurst and beer" and museums open all night, you just know the "colleagues" have lost the plot.

No amount of rhetoric or freebies is going to restore the drive afforded by the vision of its original founders. This is an organisation that has nowhere to go but down.