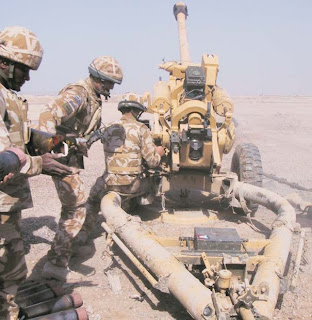 We learn today from The Sunday Telegraph that British commanders in Iraq have ordered artillery to be used against insurgents for the first time since the end of the war.

The move follows a sharp increase in mortar and rocket attacks on military bases in the city. Military officials confirmed that troops at five bases are being shelled daily with mortars or rockets.

It is understood that Maj-Gen Jonathan Shaw, the commander of the multinational division in southern Iraq, asked for a battery of six 105 mm guns from 40 Regiment Royal Artillery to return to Iraq to counter long-range attacks by insurgents. This will be the first time that British forces have used artillery in Iraq since 2003, when it was used during the war against Saddam Hussein's forces.

Says The Telegraph, for several months, insurgents have been attacking British bases with 120mm mortars and rockets that can be fired from several miles away. Both weapons are notoriously inaccurate in untrained hands and many of the rounds fired at British bases land in residential areas, killing and injuring civilians. Commanders hope that the insurgents will be discouraged if they are met with an artillery barrage from the British 105mm weapons every time they open fire.

Good though this news is that we are taking active counter-measures, I have been hearing from a variety of sources that, unlike the "gung ho" US, the British will not use artillery because of the risk of civilian casualties. Now it seems we too are to join the ranks of the "gung ho", returning fire when attacked.

But the fact that we learn of this from a newspaper can only be a deliberate snub to MPs – and Parliament in general. For some months now, several MPs have been asking the secretary of state for defence for details of measures which the MoD is taking to protect our troops, only for the questions - one as recent as last last Wednesday - to be dead-batted on security grounds.

What MPs cannot be told, however, can be released to a national newspaper and thence into the public domain. That, by any measure, is contempt of Parliament.