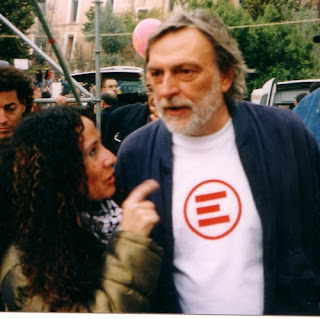 Remember the story of Italian journalist Giuliana Sgrena, captured by an Iraqi terrorist group and released after the Italian government paid out the demanded ransom? The Americans had, quite rightly, demanded that no ransom be handed over to terrorist group. The Italians were so anxious not to let the Americans know what was going on that the car in which she was taken to Baghdad airport was not clearly identified. As a result an Italian secret service officer, Nicola Calipari was killed.

Or this story of the two Italian aid workers (what on earth has happened to them?) whose release may well have been brought about by the Italian Red Cross transporting wanted terrorists through American check-points.

Last May it was estimated that Italy had already paid over the equivalent of $11 million in ransom (and that is not counting, presumably, the use of those Red Cross ambulances).

This week we have news of an Italian journalist Daniele Mastrogiacomo, 52, of the leftist newspaper La Repubblica, who does seem to have had a very bad time, indeed, in the hands of his Taliban captors, being released after the Italian authorities in Afghanistan released five Taliban prisoners, one of whom immediately announced his intention to hunt down infidels.

This is, if anything, more worrying than the stories of ransom being paid over, though, not perhaps more than the misuse of Red Cross immunity. The Italian opposition has protested and at least one member of the National Alliance party is talking of a very dangerous precedent.

Romano Prodi’s spokesman, Silvio Sircana, who happens to be a friend of Mastrogiacomo’s, is unfussed. As far as he is concerned, Italy did the right thing morally and from a humanitarian point of view:

We think that the life of a person is very precious. So if there is a chance to save a life we must do all we can do. And this was our very simple line and not anything more.

Well, well. What of the lives that will be taken as a result of those Taliban prisoners being released? Or the lives of future hostages, gleefully kidnapped by the Taliban in the hopes of future agreements of this kind? Or are they not all that precious if they are not left-wing Italian journalists with good contacts among the top political brass?