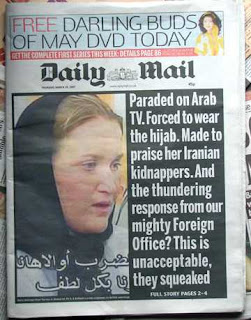 One need hold no brief for the Foreign Office to feel that the Daily Mail's criticism is a little bit wide of the mark.

For sure, its policy of appeasement has not improved the credibility of Britain but, as the latest Iranian response indicates, our diplomats have been dealt an almost impossible hand, where they hold very few cards.

Clearly, the Iranians are playing games, now suggesting that the promised release of Faye Turney may be delayed because of the UK's "incorrect attitude", demonstrating quite how difficult it is to deal with a government that simply has no conception of what playing by the rules actually means.

But, while seeking the release of our people is vitally important, not for one moment must the government (and especially the MoD) be allowed to gloss over the circumstances which gave rise to their abduction in the first place.

A classic line was taken by The Daily Telegraph with Thomas Harding cosying up to his chums in the military, noting only of the incident that, "caught unawares," the British personnel "had little choice but to surrender." He does not ask, though, why the personnel were caught with their pants down.

Neither was there any hint of criticism of the military from Tory foreign affairs spokesman William Hague who, in yesterday's Commons debate sought merely to "commend our forces for the difficult and dangerous tasks that they are undertaking", then asking whether the MoD would "look again at its configuration of forces in the area, so that the forces undertaking these tasks are fully protected, or better protected, or better able to deter interference with their activities?"

Will the Foreign Secretary have a word with the Secretary of State for Defence to ensure that in future no British forces operate in Iraqi waters - which are known to be extremely dangerous; past incidents proved that -unsupported and without appropriate protection and back-up? Could there not be other incidents in future - we very much hope not - and might this not be a dangerous precedent given that, possibly bearing in mind the current rules of engagement, there is no meaningful deterrent against the Iranians?

Beckett, of course, sought to divert attention from this issue, stating that "there will be a careful review of the courses of action that the government should pursue in future," but then emphasising that "the focus at present is on action on the diplomatic front to recover our personnel" … exactly the line taken by the bulk of the media.

Winterton, however, backed up her plea with a letter published in today's Telegraph, picking up the sloppy reporting by the paper a few days earlier. She wrote:

The report (March 27) that "questions were asked in the House of Commons yesterday about whether rules of engagement prevented the Cornwall from opening fire " is inaccurate. I did not even mention the Cornwall in my question to the minister of state.

The best information available is that the Cornwall was out of visual contact with the two British boats when they were surrounded by several Iranian fast patrol boats with heavier arms. The question is why that was the case, given the risks in the area and UN action the following day to impose sanctions on Iran over its atomic programme, which was likely to cause some reaction. If the Cornwall had been in visual contact, would the Iranians have risked the abduction?

It seems to me that Britain is expecting its service personnel to take on ambitious and dangerous projects without providing adequate protection and back-up.

For once, even The Business is losing its usually deft touch, remarking, entirely reasonably that, "Spineless Britain faces its greatest humiliation since the Suez crisis," but failing to comment on why we ended up in this mess in the first place.

Beckett's "careful review of the courses of action that the government should pursue in future," is not good enough. The military must be held to account and, if there are failings – at whatever level – these must be identified and action taken to ensure there are no repeat failures. It serves no one's interest – least of all the armed forces – for any failings to go uncorrected. There must, therefore, be a proper, public inquiry on how the events of 23 March came to pass.