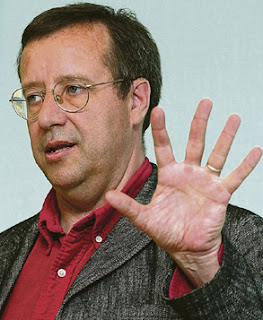 Small European nations, such as the three Baltic states, cannot easily sustain the cost of maintaining a dual defence arrangement with Nato and the European Union.

So said Estonian President Toomas Ilves (pictured), at a press conference in Helsinki with Finnish President Tarja Halonen, both leaders agreeing that the best solution for nations like Estonia, Latvia and Lithuania is for the EU to increase collaboration with Nato and establish a joint approach to European defence systems.

This is according to Defense News which has Ilves complaining that, while large European countries might be able to afford a dual system, the smaller ones cannot. Estonia, for instance, is both a Nato member and a nation within the EU. "In defence terms," he says, "this demands we dedicate time and resources to our Nato role and EU defence systems. This is costly for small nations. The vital dimension is that the EU and NATO must collaborate more closely."

This blows apart any claim that the EU defence identity is complementary to Nato, simply providing an alternative political framework for deploying the same military forces in areas where there is no Nato interest.

Hence does the Estonian president complain that it makes no sense for Europe to have two powerful parallel organisations that have "little contact with each other." He believes it would be much better "if small European nations could co-ordinate their defence arrangements with a single European defence organisation, rather than having to budget for two parallel organisations."

"National defence costs are rising at a time when European nations are being called upon to support Nato's international crisis missions and contribute to the EU's rapid response forces," added the Finnish president. "The issue of dual defence arrangements is one that needs to be examined."

This is, of course, precisely the issue to which we have been drawing attention for some time, so it is helpful to get formal acknowledgement that Nato EU members are having to finance what amounts to two separate defence polities.

This has been evident in the British struggle to support the war efforts in Iraq and Afghanistan, while also building up the incompatible equipment and structures needed to meet the specifications for the European Rapid Reaction Force.

One area where Ilves is wrong, though, is in believing that large European countries can necessarily afford a dual system. The UK cannot afford huge white elephants like the Eurofighter, and it cannot afford two carrier groups and the Army's FRES programme, and support two wards, all on the current defence budget.

Our government has to admit that this, and – if it is going to maintain its commitments to Iraq and Afghanistan – cut back its support for building a European defence identity. Otherwise, it must put much more money into the defence budget and come clean with the British public, identifying the additional expenditures as part of the price of further European integration.