You can rely on the Pope 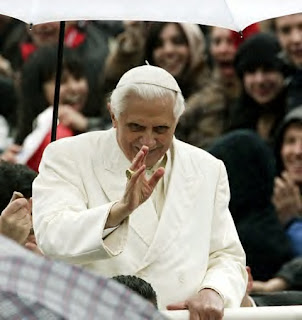 You can rely on Pope Benedict XVI to introduce a cautionary, in some ways alternative, point of view whenever there is a little too much celebration and self-congratulation going on.

On Saturday, while the politicians assembled in Berlin for their taxpayer-funded celebrations, the Pope addressed European bishops and expressed his frustration with the EU and its Berlin Declaration. God and Christianity had not been mentioned.

The question of whether references to Christianity should be included in the European Constitution had come up before with the countries dividing mostly but not exclusively along Catholic/Protestant lines, though ultimately the suggestion was blocked by President Chirac for political rather than religious reasons. Much of post-1789 French history has been taken up with battles between the Church and the State with the latter now in firm ascendance.

As it happens, BBC 24 Hours News decided they wanted a brief discussion on the subject, somewhere between England’s pathetic performance in Tel Aviv and the Pakistani cricket captain being questioned about his coach’s murder in Jamaica.

My immediate point was one that rather surprised the interviewer as it had flummoxed the “researcher” and that is the EU’s intention being the creation of a European state. That being so, I continued, the Pope is wrong as in western political and Christian tradition, separation of church and state is fully accepted. I am not sure the BBC's employees were quite au fait with this.

On the other hand, I continued, the Pope is absolutely right in pointing out that the EU and its grandees have no definition of European identity. Indeed, I said, there is no such thing and that is the problem with all these celebrations – the EU is not based on anything. That is why they can come up with rubbish like “Europe” being a centuries old ideal of peace and harmony. The most cursory look at European history will prove that one wrong.

Ah yes, said the interviewer triumphantly, but there has been peace since we have had the EU and that is what the celebration is about. To be fair to the man, he was just saying it because that is what he was told. I do not think he believed it. Still, it gave me a very pleasant feeling to know that the enemy has just delivered himself into my hands.

Most of the members, I explained patiently, have not been that for fifty years, so the celebration is nonsensical. And, in any case, these fifty years have covered such peaceful events as the suppression of the Hungarian uprising, of the Prague Spring, of the Polish trade unions and a ten year long war in the Balkans. Business as usual, in other words.

In the end, we left the subject of European identity unresolved because news was coming through from Jamaica.

The Pope has clearly retained his knack for upsetting self-righteous politicians. There they are celebrating a completely non-existent European identity as expressed through the EU, an ever less popular entity and there he is, saying that Europe has lost its way, has turned its back on its own history, has committed a form of apostasy to itself and its true traditions.

The problem is that European history has many aspects and the EU for reasons of its own chosen to emphasise a rather simplified and anti-religious form of enlightenment. (Sadly, I do not think Voltaire or Diderot, never mind John Locke, would have approved of the Berlin shenanigans this week-end.)

Judaeo-Christianity is as important to European history as that much vaunted humanism, in fact more so, but it is difficult to express something as complicated in the ultra-simplified narrative of the European Union, just as it is impossible to reconcile traditions of Roman Law, Anglo-Saxon Common Law and Germanic Customary Law.

At the heart of the European project lies an ideological contradiction. On the one hand the European Union is an expression of European values, consisting as they do, according to these people, of humanism, love of freedom, enlightenment and democracy (and motherhood and apple-pie, though some prefer apple-strudel).

On the other hand, we need the European Union because the Europeans are really not worthy of the noble European ideals, and keep forming themselves into groups that fight each other. Some of these groups are called nations and quite a lot of them are more enlightened, freedom-loving etc etc than the organization that has been created to replace them in the name of those ill-defined European values.

No wonder the Pope finds all this piffle despicable.