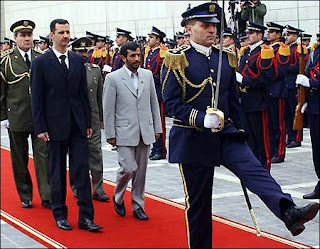 Today's Wall Street Journal carries an editorial entitled "Tehran's hostages" with the subtitle "Iran's Act of War against our British Allies". It recalls various other Iranian acts that go against any international agreements and makes it clear that Britain and the United States must react quickly and efficiently. Just imagine, it adds, what would the situation have been like if Iran were a nuclear power - a prospect that may not be all that far away.

What I found interesting was the immediate reaction across a good deal of the American media and the blogosphere (or the parts of it that are genuinely interested in other countries, that is, curiously enough, on the right). Uniformly, there was outrage and support.

Britain, America's close ally, was under attack, they all said. The UK and the US must do something. There was no question of gloating or "told you so" attitudes, though, given the smug superiority some of the British military and politicians speak, they would have been justified.

How different, I could not help thinking, from the sort of posturing we might see in the British media, among the British political commentators and, even, a great stretch of the public, if it had been the other way round.

There would have been an outpouring of gloating mock-sorrow and a plethora of useless advice. Blogs like this one, that take an interest in the world outside (hint: not that many of the so-called political blogs in Britain do) would mostly line up on the side of the United States but we would still get plenty of pompous and (there is no other word for it) gloating comments.