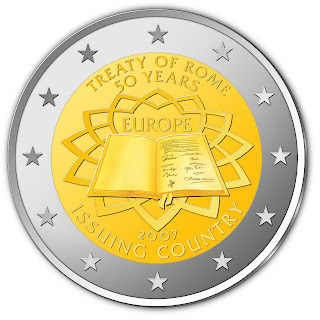 Yes, yes, I know what the equivalent is in that phoney Gaelic the IRA adopted some time ago but it is a good slogan, particularly when it describes the situation quite accurately.

We have on various occasions pointed out on this forum that our so-called allies are more of a problem than our enemies. I can deal with the Commission but I find the various eurosceptic organizations hard going.

Last week I wrote about the launching of Global Vision and tried hard to be as objective as possible. I am beginning to find that a bit of a chore, having received a copy of their press release this morning [it does not seem to be on the website as I write this].

The release is about the 50th anniversary of the European Union and we shall have many more of these. This is how Global Vision starts its comments:

Global Vision, the new business backed campaign group, said today that the EU is right to feel a real sense of achievement for the role it had played over the last 50 years in helping bring an unprecedented period of peace and prosperity to post war Europe.

All right, I accept that Western Europe has had 50 years of peace and, indeed, prosperity. Ahem, NATO and the nuclear umbrella played no part in it?

Presumably, Global Vision sees the EU and its predecessors as the organization that prevented another Franco-German war. It was not on the cards in 1957. Whatever the ins and outs of the Treaty of Rome, it was the fact that the two countries had no desire to go on destroying themselves and each other that made the agreement possible, not the other way round.

Besides, who was the real enemy in 1957? The idea that a Franco-German war was the greatest danger had become outdated by about 1949.

I guess Denmark did not invade the Netherlands or Luxembourg in this period (or any other but let that pass).

The rest of the press release talks of those solutions being outdated for the global 21st century and the need to renegotiate everything in order to turn the European Union into a loose alliance, “based on free trade and co-operation”.

Britain should lead the way by negotiating a freer relationship so others may follow.

The UK should use the discussions over the Constitutional Treaty to put our new vision on the table, opting out of political and economic integration if the others are determined to push ahead with the current outdated model.

As there are no formal discussions over the Constitutional Treaty that might lead to a new treaty, this does not seem to be a particularly useful advice, unless Lord Blackwell means that Britain should push for a new IGC. When asked at the launch whether that was what he had in mind, he slid away from a response.

The European Foundation has also issued a press release [not on their web either]. It is marginally better and never did I think I would say that. Possibly the fact that Ms Sara Rainwater, quondam editor of the European Journal is now the Manager of Global Vision is the Foundation’s gain. If she wrote that press release, she needs some lessons in grammar and sentence structure.

While the European Foundation seems to attach far too much importance to a Declaration that will have no legal validity and is likely to consist of motherhood and apple-pie statements, while it is a little muddled on the 1947 – 1957 period in West European history (Eastern Europe and the Soviet Union do not exist for them either), the press release does say:

Only by calling for organized referendum, democracy and accountability can nations begin to offer a positive alternative to continued integration. This was proved in the French and Dutch referendums of 2005, when electorates voted against a European constitution. The alternatives to the federalist project would be based on an association of nation-states premised upon a free trade arrangement.

Of course, this, too, is an exercise in self-delusion. You can call for anything you like (how many referendums do they have in mind, by the way?) but one recalls Harry Hotspur’s response to Owen Glendower’s boast that he can “call spirits from the vasty deep”:

Why, so can I, or so can any man;
But will they come when you do call for them?

Let us not be too uncharitable. The European Foundation does

argue that now is the time to call for the renegotiation of our existing European Treaties in order to ensure that the European Union is beneficial to all countries and peoples involved.

Amid all the verbiage and pointless calls for the moon there is a glimmering of understanding that the existing treaties are a problem. Of course, when one thinks about it all carefully, that is not all that different from Global Vision’s call to use the “existing” negotiations to create a new structure or Open Europe’s call for a reform of the European Union, echoed by both the Prime Minister and the Leader of the Opposition.

It looks like we shall fight alone for a while.