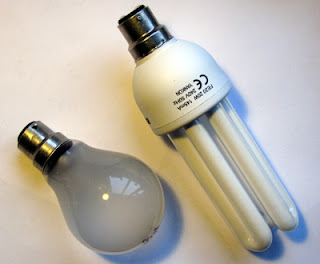 Today's Daily Mail carries a long op-ed from Booker setting out the case against the ban on incandescent light bulbs which was requested by the leaders of the 27 member states at the European Council last week.

To put it in context, Booker writes of us now being deluged with news of the latest proposals from our politicians about how to save the planet from global warming, citing Gordon Brown and his "new world order" to combat climate change, coming on top of Mr David Cameron's proposals for strict "green" limits on air travel.

Thus we have the EU declaring that a fifth of all our energy must be "green" by 2020, even though there is no chance of such an absurd target being met. We must have "green" homes, "green" cars, "green" fuel, even microchips in our rubbish bins to enforce "green" waste disposal... and now "green" lights.

Echoing this blog, Booker wonders whether these politicians any longer got the faintest idea what they are talking about. "Do they actually look at the hard, practical facts before they rush to compete with each other in this mad musical-chairs of gesture politics?" he asks.

And, in response to his own question he then points up "just one instance" of the hysteria now sweeping our political class off its feet, an instance which was bannered across the Daily Mail's front page on Saturday in the headline "EU to switch off our old light bulbs". 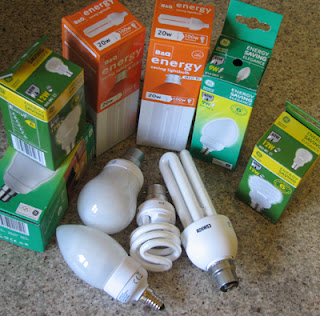 This was the news that, as part of its latest package of planet-saving measures, the EU plans, within two years, to ban the sale of those traditional incandescent light bulbs we all take for granted in our homes, forcing us to buy the so-called high energy efficent lights.

Aside from anything else, this is an incredible speed given that one of the main lobbyists for change, Philips Electronics, was calling only for a ten-year transition.

No doubt Tony Blair and the other heads of government who took this decision (following the lead of Fidel Castro's dictatorship in Cuba) purred with self-congratulation at striking such a daring blow against global warming. After all these "compact fluorescent bulbs" (or CFLs), to which they want us all to switch, use supposedly only a fifth of the energy needed by the familiar tungsten-filament bulbs now to be made illegal.

Booker notes that among the first to congratulate the EU's leaders was Green MEP Caroline Lucas, who claimed that "banning old-fashioned light bulbs across the EU would cut carbon emissions by around 20 million tonnes per year and save between €5-8 million per year in domestic fuel bills". 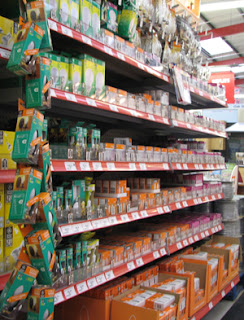 Put that way, of course, who could argue? Certainly not European light bulb manufacturers who are struggling to compete against cheap imports of incandescent lights, or the retailers who stand to benefit from the much higher margins on CFLs.

Yet some of the people who are arguing - and are far from impressed by the EU's decision - are not a few electrical engineers who have been clutching their heads in disbelief. Did those politicians, they wondered, actually take any expert advice before indulging in this latest planet-saving gesture?

In fact the virtues of these "low energy" bulbs are nothing like so wonderful as naïve (self-serving) enthusiasts like Ms Lucas imagine them to be. Indeed in many ways, the experts warn, by banning incandescent bulbs altogether the EU may have committed itself to an appallingly costly blunder.

It is a decision which will have a far greater impact on all our lives than most people are yet aware, presenting the UK alone with a bill which, on our government's own figures, could be £3 billion or more.

The result will provide a quality of lighting which in many ways will be markedly less efficient. Even Angela Merkel, the German Chancellor who put forward the proposal, admitted that, because the energy-saving bulbs she uses in her flat take some time to warm up, she often has "a bit of a problem" when she is looking for something she has "dropped on the carpet".

But even more significantly, because they must be kept on so much longer to run efficiently, the actual amount of energy saved by these bulbs has been vastly exaggerated.

So what are the disadvantages of CFLs over the traditional bulbs we will no longer be allowed to buy? Quite apart from the fact that the CFLs are larger, much heavier and mostly much uglier than familiar bulbs - and up to 20 times more expensive - the vast majority of them give off a harsher, less pleasant light.

Because they do not produce light in a steady stream, like an incandescent bulb, but flicker 50 times a second, some who use them for reading eventually find their eyes beginning to swim – and they can make fast-moving machine parts look stationary, posing a serious safety problem – the so-called "strobe effect".

CFLs cannot be used with dimmer switches or electronically-triggered security lights (see package label, illustrated below), so these will become a thing of the past. They cannot be used in microwaves, ovens or freezers, because these are either too hot or too cold for them to function (at any temperature above 50C or lower than –18C they don't work), 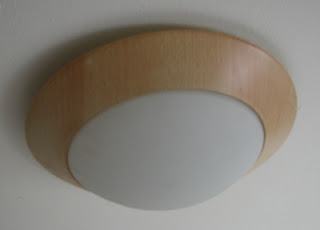 More seriously, because CFLs need much more ventilation than a standard bulb, they cannot be used in any enclosed light fitting which is not open at both bottom and top (such as the type illustrated) - the implications of which for homeowners are horrendous.

Astonishingly, according to a report on "energy scenarios in the domestic lighting sector", carried out last year for Defra by its Market Transformation Programme, "less than 50 percent of the fittings installed in UK homes can currently take CFLs".

In other words, on the government's own figures, the owners of Britain's 24 million homes will have to replace hundreds of millions of light fittings, at a cost upwards of £3 billion. Not only is this an unwelcome cost, but the time scale of two years to replace as many as 60 million light fittings is wholly unrealistic. 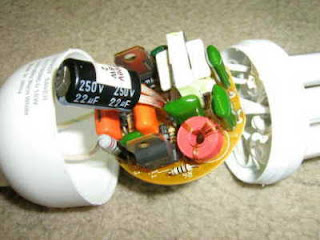 In addition to this, low-energy bulbs are much more complex to make than standard bulbs, requiring up to ten times as much energy to manufacture. Unlike standard bulbs, they use toxic materials, including mercury vapour, which the EU itself last year banned from landfill sites – which means that recycling the bulbs will itself create an enormously expensive problem.

Perhaps most significantly of all, however, to run CFLs economically they must be kept on more or less continuously. The more they are turned on and off, the shorter becomes their life, creating a fundamental paradox, as is explained by an Australian electrical expert Rod Elliott (whose Elliott Sound Products website provides as good a technical analysis of the disadvantages of CFLs as any on the internet). 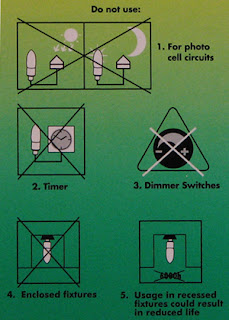 If people continue switching their lights on and off when needed, as Mr Elliott puts it, they will find that their "green" bulbs have a much shorter life than promised, thus triggering a consumer backlash from those who think they have been fooled.

But if they keep their lights on all the time to maximise their life, CFLs can end up using almost as much electricity from power stations (creating CO2 emissions) as incandescent bulbs – thus cancelling out their one supposed advantage.

In other words, in every possible way this looks like a classic example of kneejerk politics, imposed on us not by our elected Parliament after full consultation and debate, but simply on the whim of 27 politicians sitting round that table in Brussels, not one of whom could have made an informed speech about the pluses and minuses of what they were proposing.

There was not a hint of democracy in this crackpot decision, which will have a major impact on all our lives, costing many of us thousands of pounds and our economy billions – all to achieve little useful purpose, while making our homes considerably less pleasant to live in.

Such is the price we are now beginning to pay for the "eco-madness" which is sweeping through our political class like a psychic epidemic, The great "Euro-bulb blunder" is arguably the starkest symbol to date of the crazy new world into which this is leading us.