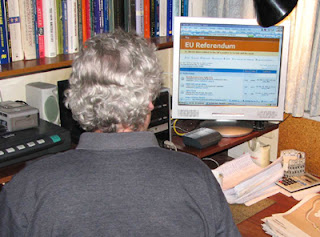 For all the focus taxes and other draconian devices aimed at reducing "carbon footprints" through the reduction of emissions from transport, a much more efficient solution is being adopted, quietly and undemonstrably by an increasing number of companies, without any intervention from the Boy King.

We are talking about a phenomenon known variously as telecommuting, e-commuting, e-work, telework, or simply working from home (WFH). And, according to Zoe Thomas in The Sunday Times today, after years of false starts, it has taken off.

New figures show that the proportion of staff working one morning or afternoon a week at home has more than doubled in the past two years, from 14.1 to 31.7 percent. There is also a significant increase in those working from home for up to 1½ days a week.

The figures are for the top 10 companies and the top two Best Big Companies in The Sunday Times "100 Best Companies to Work For" 2007 List, published this week.

One entirely predictable reason why tele-working has taken off is the spread of broadband, but there has also been a significant shift in attitudes.

According to Pete Bradon, head of research at Best Companies, which compiled the report for The Sunday Times, "The old-fashioned thinking was that working from home was just people trying to get time off. But these people tend to be more engaged and more productive. They think, 'The company's done me a favour here, I'll do them a favour back'."

But the real winner is the so-called "green agenda". A worker who normally travels to work by private car and spends one day a week at home is using 20 percent less fuel, creating 20 percent less congestion and is reducing emissions by 20 percent. If enough people took this option, the strain on infrastructures would be very substantially reduced, more so than virtually any other option on the table can achieve.

The findings are very much more bullish than earlier surveys, and even those which seem to be lukewarm attest to the advantages.

Certainly, as one who has worked from home for most of his career, I can attest to the advantages of this style of working. Seconds after waking, if need be, one can be at work, yet the flexibility afforded means that personal demands, from shopping through to doctor’s appointments – or whatever – can easily be integrated into the working day, without affecting performance.

Yet, none of this has the profile and the "big ticket" drama of the sort of initiatives that the Boy seems to favour. But then, as we are beginning to learn, gestures are so much more important than encouraging things that actually work and improve peoples' lives.