A matter of respect 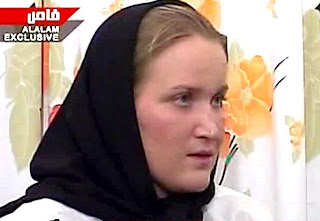 It might have taken a little time, but – a week on - at least The Daily Mail has woken up to the full extent of the humiliation which our proud nation has had to suffer.

Thus, as the Iranians through their Moscow ambassador hint that a show trial is being prepared for our kidnapped service personnel – with the truly ghastly prospect of "punishment" if the "charges" against them are proven - the paper proclaims the stark truth in a robust leader: "This humiliation shames Britain".

The parading of the British hostages on Iranian television is not just humiliating for them but for this country, it says. "Those images will be beamed around the world, with the clear message that we are impotent in the face of this blatant aggression and provocation."

This is a theme picked up by Max Hastings in the Mail's Saturday essay. He rightly reminds us of past glories and the power of gunboat diplomacy and notes that "Blair's true legacy" is a bankrupt foreign policy and the tarnishing of our "glorious Armed Forces".

Along the way, Hastings also notes that there is no credible military option available to us in seeking to release the hostages, thus arguing that we must rely on diplomacy. He then remarks on the tardiness of the EU response (so much for all Blair's wasted wooing of the EU, he writes) and the ineffectiveness of the United Nations, under which mandate the British forces were acting.

Hastings, though, does not offer a way out – a solution to the crisis. He believes that there is nothing specific we can do as we are entirely in the hands of the Iranians. So the great man turns to Gordon Brown, the prime minister soon to be, and asks, "what will he do differently, to rescue this country from the international shambles which Blair will soon bequeath to us?"

Standing aside from Hastings for a moment, those who would advocate an invasion of Iran might do well to remember that it is the major supplier of oil to Japan. A disruption in the flow to that country alone would have a knock-on effect which could plunge the world into recession – a scenario we explored last year (here and here) - while the closure of the Strait of Hormuz, cutting off Saudi and Kuwaiti (and Iraqi) oil, would most certainly have that effect.

However, to rule out such an ostensibly satisfying option is not to say that, as Hastings suggests, passive diplomacy is our only option. And this is not the only issue where Mad Max goes off the rails. He writes:

When this business is over, hard questions should be asked in Britain. Who was responsible for exposing the sailors within reach of one of the most reckless nations in the world? This was a kidnapping waiting to happen. It has laid bare the bankruptcy of British foreign policy, shackled to America's Iraq calamity. Blair has forfeited respect in the Muslim world, where a decade ago our influence remained substantial. He has lost not only the battle to turn the British people into Euro-enthusiasts, but also his campaign to make this country a major force in Europe.

Here, we see the glimmerings of understanding, only for them to be submerged in left-wing rhetoric and nascent anti-Americanism – never far from the surface where Hastings is concerned.

For sure, we have lost the respect of the Muslim world – and especially Iran – but is it because of "the bankruptcy of British foreign policy, shackled to America's Iraq calamity"? The "kidnapping waiting to happen" was hardly a function of foreign policy. More likely, it was – certainly in the view of this blog - a result of failures of military intelligence, operational planning and execution.

However, if you think about it, the rot did not start in the northern Gulf. As we have been recording meticulously on this blog (in postings far too numerous to list here), Army policy in response to continued attack on British land bases has been supine to the point of being craven.

For years now, Iranian-backed militias have been taking free pot-shots with mortars and rockets at British bases, and the Army response has been to hunker down and do nothing (or very little).

When it got too much to bear in Camp Naji, al Amarah, the Army simply ran away, abandoning the camp, which was stripped bare by the militias in 24 hours. Similarly, we abandoned the British Consulate in the Basra Palace complex, despite a £13 million refit, because of constant mortaring - and we are now planning to retreat to barracks in Basra Air Station.

It seems obvious, therefore, that the Iranians must have taken home the message that you can attack British forces with impunity - they will do nothing about it, other than run away. From there, it is hardly any great feat to link the Iranian aggression against Royal Navy boarding parties and the attitude of the Army.

Should that be anything like a correct analysis – or even partially correct – then the answer is equally obvious. What we need is a variation on the theme adopted by the Metropolitan Police of yore, when one of their own was murdered. Without knowing who was responsible, officers would "turn over" villains, making their lives intolerable and ordinary theivery impossible. Sooner or later – or so the theory went – the criminal fraternity would sue for peace, and deliver up the murderer to justice.

In like manner, we know that there is strong Iranian influence (and presence) in southern Iraq. In that region, therefore, Iranians are accessible – and vulnerable.

There, a robust, aggressive response by the Army, with the help and support of our allies and the Iraqi Army – which is proving to be a force to be reckoned with – all directed against Iranian interests, could soon have Tehran suing for peace. And even if that did not work directly, such action would go a very long way to restoring that precious commodity which we have lost – respect. More than anything else, we must imbue our enemies and friends alike with the knowledge that the British are not to be trifled with.