The power of lists 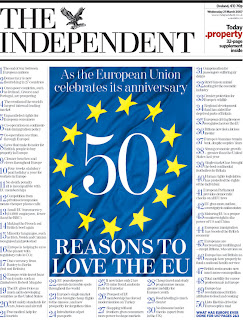 As the EU celebrates its anniversary, The Independent newspaper looks at what it believes to be 50 benefits the Union has brought, and asks: "What has Europe done for us?", all under the general title: "50 reasons to love the European Union".

Such is the power of lists that a number of bloggers, such as here, could not resist taking on the challenge of debunking this one – and good luck to them.

What is interesting about the exercise, however is that The Independent in common with the Europhile tendency, does not even try to make a coherent, robust case for the object of its affections. It merely trots out the same old mantras, half-truths, distortions and outright lies that the "Europeans" always have done and always will do.

But, if these made the difference between us staying in the Union and leaving, we would have been out years ago – because the arguments simply do not stand up. That we remain in the EU, therefore, stems from something more than the perceived benefits or otherwise.

Brutally, one might observe that we are still in because not enough people care either way. The EU does not impinge on them personally in such a way, or with such force, that they believe withdrawal to be an important issue.

Therein lies the weakness of The Independent list – and the attempts at rebutting it: the points raised are largely irrelevant. The fact is that, given the complexity of international relations and the need to inter-relate with our neighbours – we need mechanisms and organisations to manage these issues. In effect, if the EU did not exist, there would almost certainly be pressure to invent it.

Until or unless we can come up with credible alternative, therefore, the EU will continue to be seen by the many as a necessary evil, with some uses that justify the inevitable disadvantages. Even that may not be enough, however. The ultimate determinant will be the balance between perceived advantages and disadvantages, and it is the latter – I suspect - which will eventually force change.

This is almost certainly why the EU is always attempting to re-invent itself, currently framing itself the protector of the environment. But it is a high risk strategy, as the green "bubble" is bound to burst, sooner or later. And when it does, the Eurosceptics need to be ready to exploit the disarray that will inevitably follow.

For the time being, The Independent can have its list, the last item proclaiming: "Lists like this drive Eurosceptics mad". Actually no – they leave us with the sense of how pathetic and inadequate the Europhile case is, reinforcing our view that, with so little to offer, it must surely fail.