Something of an irony 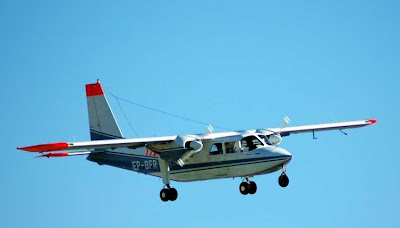 It is something of an irony that a few days before the Iranian Revolutionary Guard kidnapped 15 of our marines and sailors, Iran's Civil Aviation Organisation took delivery of its first new western-made aircraft since the 1979 Islamic revolution.

But the biggest irony of all is that the aircraft - which will be jointly operated between PAAviation and Iran's CAO for skydiving training – is a British-made 10-seater Britten Norman Islander. However, the interior can be re-configured to transport VIPs and it can also operate as an air ambulance or be used for coastal patrols.

The sale, worth $2 million, has been specifically agreed by Washington as part of efforts to encourage Tehran to halt its nuclear program, and a $2 million package of spare parts has also been agreed, to bring 10 other Islanders (bought before the revolution) to airworthy condition. It was thought that Britten Norman might send technicians to Tehran to help supervise the rebuild.

The agency which negotiated the sale says that this link gives an idea of specification of the aircraft. Needless to say, the Iranians are delighted with the deal so far and, we are told, have expressed interest in a further three aircraft. It will be interesting to see if our government now allows such a sale to go ahead – but then, the Iranians did recently increase their negotiating power somewhat.