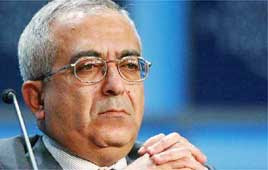 According to the Sunday Telegraph the EU alone sent £59.5 million to the Hamas-led (if that is the right expression) Palestinian government in aid, despite the fact that Hamas has not fulfilled any of the conditions, supposedly imposed on it by the international authority.

On top of that, an unknown and “a far greater sum directly to hospitals, power generation projects and to families in need”. No proper auditing or accounting of these sums have been done but then there is nothing new in that. There has never been any proper auditing or accounting of moneys given to the Palestinian Authority or the Palestinians in general.

An estimated £362.5 million has flowed into Palestinian government coffers from abroad since the election that brought Hamas to power and ushered in a period of internal conflict that came close to all-out civil war.

That, of course, excludes the amounts going through NGOs to “hospitals, power generation projects, families in need” and whatever else Jimmy Carter may have thought of as a suitable recipient of funds.

Where is all this money? Alas, as before, there is no accounting for it.

Salam Fayyad, a former World Bank Official, former IMF representative in the Palestine and former Finance Minister under the late unlamented Chairman Yasser Arafat, says that nobody knows what happened to the money.

Mr Fayyad, a member of the Legislative Council, from the Third Way Party (they have two members, the other one being Hanan Ashrawi) is about to become the Finance Minister again. He had been touted as a possible Prime Minister but one of his conditions for accepting the post was that Hamas should recognize Israel’s right to exist. Unlike the international community, he seems to have kept his word and not accepted the job without his main condition being fulfilled.

According to the Telegraph

Now, Palestinian Authority spending is out of control, salaries are being paid to workers who never turn up, and nobody can track where the money is going, according to Mr Fayyad.

There was no way to be certain that aid was being used as intended, he admitted. "Please write this: no one can give donors that assurance. Why? Because the system is in a state of total disrepair."

What the Telegraph journalist does not ask is why precisely Mr Fayyad should be so surprised. He was, after all, Finance Minister five years ago, when the situation was not much better. Millions of pounds, dollars and euros that had been sent in aid to the Palestinian Authority disappeared, some to surface as payment to such delightful organizations as the Al-Aqsa Martyrs’ Brigade and to families of unsuccessful suicide/homicide bombers, some not to surface at all.

Mr Fayyad, having apparently set up some sort of a budgeting system five years ago, having seen it disintegrate and having realized the magnitude of the problem now has various plans:

He said his first objective would be to make the finance ministry the sole conduit for incoming aid, and to reinstate proper audits. That meant no more financial back channels or border smuggling, he said. "It's not my intention to manage the Palestinian budget system through the brown bag." The Palestinian Authority's unchecked proliferation of government jobs - growing by 11 per cent a year - is another threat to its existence, the World Bank said. Mr Fayyad acknowledged that the problem of thousands of absentee employees was "serious", but said it would take up to five years to bring wages into line with income.

Some of us might point out that unbridled aid is not “income”. Would this experienced financial manager be able to come up with a budget that was slightly different? After all, we have our own budget (several of them) already and one sees no reason why there should be a Palestinian one as well that dissipates our tax money.