He is really going 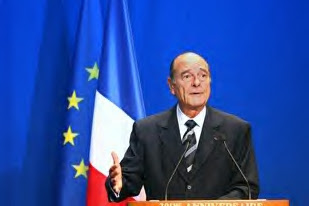 Yes, ladies and gentlemen, President Jacques Chirac, who has presided over some of the worst years in modern French history (though not as bad as the years when the Algerian and the Vietnam war were being lost) has announced that he will not be seeking that unprecedented third term.

Chirac has even failed in his efforts to prevent Nicolas Sarkozy from standing as the official UMP candidate in the looming elections. M Sarkozy had hoped that President Chirac will endorse his candidacy in his speech and, according to the BBC, is still hoping to receive that endorsement.

Al-Jazeera has published a very useful time table to the complicated procedure that precedes the actual elections.

President Chirac, who rather fancies himself as an international statesman, has been heard talking about "life after politics". Given various past court cases in which his colleagues had been found guilty of financial misdemeanours, he must be hoping that the life will not be behind bars.