A nation of wimps led by wimps 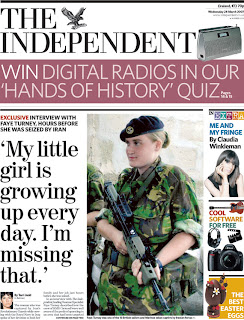 For all their supposed savvy, there is something touchingly naïve in The Independent today, claiming as it does an "exclusive" interview with the female sailor Faye Turney, recorded only hours before she was abducted by the Iranian Revolutionary Guard.

In a world where much of the media spreads its wares over the internet, does not the paper realise that we can read the same interview (or extracts from it) on the BBC website, in The Telegraph, in The Scotsman, The Daily Mail, and sundry others? Or does it think that people who read The Independent do not even look at anything else?

That the words and wisdom (and pictures) of Mrs Turney should grace the pages of so many newspapers, however, somehow typifies the state of our nation. As the captivity of the forlorn fifteen stretches into its sixth day, the attention devoted to the one female member of the former boarding party seems to mark yet another stage in the feminisation of our society – as a precursor to its headlong dash into infantilisation.

That Mrs Turney also has a three-year-old daughter, currently looked after at home by her husband also seems to convey a message. This is a society which appears content to send wives and mothers out to war while the men stay at home to look after the children.

Nor indeed do we get much comfort from the father of a naval officer serving in HMS Cornwall in the Gulf. In a letter to The Telegraph he finds it "very interesting to read the comments of those who seem to think that Cornwall should have somehow intervened to prevent the capture of her sailors and Marines by the Iranians." Asks Mr P R Woad of Chichester, West Sussex, "What should she have done? Blow the Iranians out of the water?" Er…. yes. What, in the final analysis, are warships for?

It is rather fitting, therefore, that the most robust comments on this debacle actually come from a woman, the redoubtable Melanie Phillips, writing in The Daily Mail. In its response to these events, she writes, "Britain seems to be in some kind of dreamworld. There is no sense of urgency or crisis, no outpouring of anger. There seems to be virtually no grasp of what is at stake." She then adds:

Some commentators have languidly observed that in another age this would have been regarded as an act of war. What on earth are they talking about? It is an act of war. There can hardly be a more blatant act of aggression than the kidnapping of another country's military personnel.

Melanie is absolutely right. All we are getting of Blair and his sad crew are reports that he has "piled the pressure on Iran" and is now demanding "the immediate release" of our personnel.

It takes Victor Davis Hansen of the National Review to remind us that EU is Iran's largest trading partner and "a cessation of commerce would do more than anything to weaken the theocracy."