With the UK Independence Party doing its best to self-destruct, under the weight of its own incompetence and the sustained assault of two Sunday newspapers, it does not seem entirely a coincidence that the Boy "we don't talk about Europe" King should come out of the woodwork with a speech about the European Union.

Billed by The Times as "one of his most important speeches since becoming Tory leader", the carefully crafted leaks tell us that the Boy "will pledge" to work with like-minded politicians to create a new European Union — one that he thinks will work for Britain and the world rather than immerse itself in distractions such as the constitution.

The actual trigger, however, is the first anniversary of the foundation of the Movement for European Reform, founded last year as a sop to those horrible critics who felt that the Boy should have honoured his pledge to withdraw the Conservative MEPs from the EPP. Instead, reneged on his pledge and set up his "movement", hoping to kick the issue into the long grass with a promise that the MEPs would leave the EPP after the 2009 Euro elections and start a new political grouping.

And so The Times tells us that this address will mark the Boy's attempt to get his party to start talking about Europe again but without becoming embroiled with sovereignty. This rather brings to mind the old joke, "Apart from that, Mrs Lincoln, did you enjoy the play"? "Apart from the threat to our sovereignty, Mr Cameron, what do you think of the EU?" 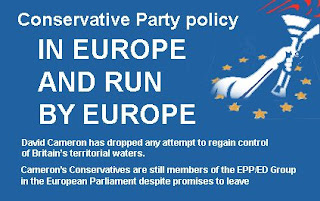 Next thing you know, he'll be telling us we're "in Europe but not ruled by Europe".

In an attempt to pass this one by what they hope is a gullible (and disinterested) electorate, an anonymous "aid" is cited as saying: "We have not been able to speak about Europe much because in the past we have always split over it. Now we want to be pointing the way towards where Europe should be going and saying that we will change it."

From this, The Times infers that the speech "will be a clear signal" that the Boy will not take his party out of Europe and also a message to supporters who are considering deserting to UKIP that he will try to change the EU. The Sun, however, is in no doubt as to the meaning of the speech, declaring that the boy "snubs" the sceptics.

That aside, it's déjà vu all over again, with the same old, same old… Working with Europe to achieve reform, little Dave is going to lead us into the sunlit uplands of a new, all-singing, all-dancing construct, made in his image, and those like him. All it needs now is the French, German, Italian, Spanish, Polish… politicians to fall back in adoration and gratitude to the Boy for sharing with them such a wonderful vision.

On the other hand, they might just ignore him completely, content that yet another British politician has lost the plot and will present no threat whatsoever to their own grandiose plans. Come back UKIP … never more has there been a need for a political party to take on these morons who believe, uniquely, that they can "reform" the EU, when all before them have failed.