It's The Sun wot's doing it! 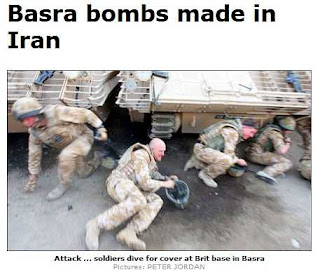 At last, one of the national dailies is waking up to the peril which our troops are facing in their bases in and around Basra, as they are rocketed and mortared daily, with a steadily increasing number of casualties.

That this newspaper is The Sun is probably helpful, as it is the largest-circulation paper, and has a strong impact on politicians, who believe (probably rightly) that it has the power to influence voting intentions.

Certainly, now that the paper has raised the issue, if there is the disaster in one of the bases that we expect and fear – where a bomb strikes a tent full of sleeping soldiers, or a crowded mess – then it will return to the issue with a strident "we told you so", which will be politically highly damaging. 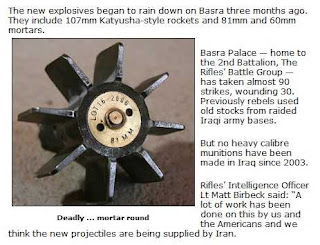 Unfortunately, it does not look as if we are quite there yet as defence editor, Tom Newton Dunn, on a visit to Basra Palace, is obviously very much in the thrall of the British propaganda machine, highlighting the Iranian threat, which was done some time ago, rather than the lack of resources to deal with the threat.

Thus, we have Tom Newton Dunn repeat the Army's defeatist mantra that, "Most of the firing is from gardens or trucks in built-up areas so troops can't fire back." There is no sense that there are other countermeasures available or that the lack of resources represents serial incompetence on the part of successive governments, and their military advisors. 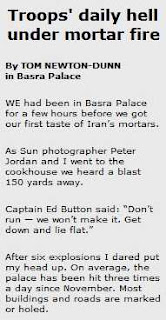 Still, Dunn's piece, highlighting the peril that our troops face, is at least a welcome contrast to the media silence on this issue. Perhaps while he is there, he might develop a better understanding of the lack of protection and political inertia.

That is not to say, however, that the Army is being entirely inert, given its successful action at the end of January and the raid over the weekend, but this is clearly not enough.

And, on that last raid, while the MoD website was quick to announce the success (and rightly so), it has been rather remiss in not announcing that a soldier was seriously injured by an "unknown gunman" who opened fire on him. We should not have to find this out from a press agency, what the MoD is leaving out.

Anyhow, if The Sun can do the mortar story, maybe some of the other media might be shamed into following and our glimmer of hope might blossom into reality.