He who casts the first stone…

Following the recent outburst from EU justice and home affairs commissioner, Franco Frattini, over the alleged "CIA jails in Europe", threatening member states with loss of their EU voting rights, perhaps the erstwhile Italian Foreign Minister should be looking a little closer to home for human rights abuses.

His own country, it seems, has been happily co-operating with the Chinese authorities in developing their notorious mobile execution chambers. Readers will recall that eighteen mobile executions vans, converted 24-seater buses, have been distributed to all intermediate courts and one high court in Yunnan province.

The windowless execution chamber at the back contains a metal bed on which the prisoner is strapped down. Once the needle is attached by the doctor, an act which breaches international medical ethics, a police officer presses a button and an automatic syringe inserts the lethal drug into the prisoner's vein. The execution can be watched on a video monitor next to the driver's seat and can be recorded if required.

The Italian involvement is gleaned from a report just issued by Amnesty International, which complains that "arms export controls in the expanded European Union are dangerously ineffective", and that "EU arms, security equipment and services are contributing to grave human rights abuses and the scale of potential abuse is now enormous".

Amongst the contributions cited are: "The involvement of an Italian joint venture company in the manufacture of vehicles used as mobile execution chambers in China." 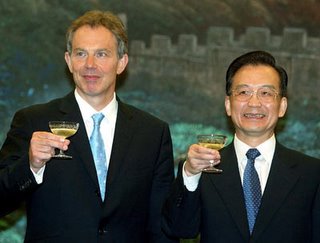 And just to remind you again, here is an extract from the joint declaration of the 8th EU-China Summit, signed by Tony Blair and Chinese premier Wen Jiabao on 5 September 2005:

Good to know that our Italian "partners" are so active in helping China protect and promote human rights.