We are so cultured 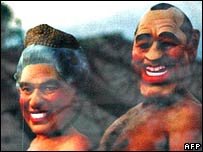 It is one of the mantras of the European project that not only is Europe the most cultured of all Continents (a dubious proposition these days) but the only way to keep this delightful state of affairs is by pumping huge amounts of taxpayers’ money into the arts, film, music, what have you.

We have seen the lamentable results of that policy in this country, though, at least, we do not take state subsidization of the arts quite as seriously as they do on the Continent in that the money we pump into bad films, poor performances and downright ghastly art is considerably smaller.

Furthermore, apart from the Kultur Kommissars (for one must never forget that where there is state subsidy there are ministries, regulators, officials, hangers-on of various kind, all being paid inflated salaries out of our taxes), not many people seriously suggest that we should practise cultural protectionism.

Two wonderful stories appeared in the media today, both illustrating the joys of state-subsidized European art.

For the first one we must go to Austria, that country of human rights and self-righteous indignation (though it seems that 70 percent of those asked in a poll in Graz were against removing Arnie’s name). It is also the country that takes over the EU presidency on January 1.

What better way of celebrating than by handing over tax money for an art project? €1 million was given by the Austrian government to something called 25 Peaces that is part of euroPART. This brings together 75 European artists. More money is supposed to have been contributed by the private sector but one wonders how much of it came other governmental organizations.

The first fruit of this entire project has just appeared in Vienna – a series of posters of naked figures clearly engaged in sexual activity, wearing masks depicting the Queen, Jacques Chirac and George W. Bush. I guess Chirac must be annoyed to find himself in that company.

“The images of the naked trio were designed by Carlos Aires, 31, from Madrid. He said they depicted "the most recent changes in Europe and the resulting spacial constructions". The project's organisers called them a "direct criticism of globalisation".”

Well, there you are, then. Art or what?

However, the Austrians are not happy and a fine little political storm is brewing. It seems that both the Right and the Left are upset, which is quite an achievement.

“In today's Krone newspaper, Wolfgang Schüssel, the Austrian chancellor, condemned the group sex image as "highly tasteless" and promised to have it removed.

"It has nothing to do with art," he said. "The borders of good taste and reasonableness have been crossed by a long way." Meanwhile, Norbert Darabos, the chairman of the Austrian Socialist party, asked: "Is this style of welcome by the EU presidency suitable? Is it going to solve any of the problems on the agenda?"

Heinz Christian Strache, the head of the Right-wing Freedom party, said the poster depicted nothing more than "group sex fantasies". He accused the government of "using taxpayers' money to drag pornography into the public arena". Women's rights groups called on the women's minister, Maria Rauch-Kallat, to condemn the poster campaign as misogynist.

It is questionable whether Chancellor Schüssel has any power to remove the posters.

Meanwhile, at another section of the European cultural front, an interesting item appeared in the Daily Telegraph. It seems that l’escroc Chirac is looking for a new career to be pursued, perhaps, after his prison sentence. Or, maybe, he is so taken by the idea that he is a reincarnation of l’empereur or of Louis XIV that he has decided to take a hand in matters artistic.

France has led the campaign for cultural, artistic and cinematographic protectionism, otherwise known as censorship or, at the very least, state control of what people can see and read.

In particular, the French government and elite dislikes Hollywood (except when it gets on its left-wing high horse). The truth is that, given a choice, most people in France want to see American entertainment rather than the heavily subsidized French films so they must be prevented from doing that.

There are some exceptions, though, and one of them was Amélie, a slightly twee French film, much disliked by the bien-pensants about a sweet Parisienne, who goes around sorting out people’s lives. Its star Audrey Tautou can be described as enchanting or someone whose sweetness gives you a permanent toothache but she is box office. And Hollywood understands box office.

Mlle Tautou was, therefore, cast as the French cryptographer Sophie Neveu in the forthcoming film of Dan Brown’s blockbuster The Da Vinci Code. I have not read the book and do not intend to see the film but I understand that much of it takes place in Paris and thither the American film-makers, Ron Howard, director and Brian Glazer, producer, repaired last year to hold auditions and to start filming.

According to the story in Newsweek, the two were invited to meet M. le Président and went to the Elysée, expecting a five-minute chat and a photocall. Instead, they were plied with coffee and conversation (presumably “Jacky” recalled that he could speak English quite well) that turned to the casting.

It seems l’escroc had someone in mind for the part of Sophie Neveu, a friend of his daughter Claude’s, the latter being known as the person who engineered her father’s recent political career.

Chirac also wondered whether the French actor Jean Reno might not be given an increase in his fee. But those dam’ Yanquis behaved as boorishly as they could be expected to do. They thanked M. Chirac for the coffee and the advice and … stuck to their own choice, who turned out to be Mlle Tautou. (At least, we do not think she is Claude Chirac’s friend.)

Much to the fury of the satirical Le Canard Enchaîné, the name of the not so lucky actress who did not get the part has not been discovered by Newsweek. At least, we don’t think so.

One assumes, incidentally, that there will be no calls for the removal of The Da Vinci Code from French cinemas.