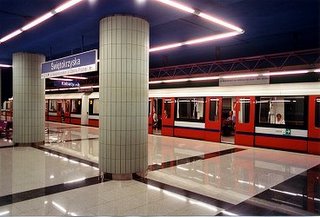 My colleague scoffs at Polish subways "acquiring the mythical symbolism of Polish plumbers and Polish builders", asking, quite rightly, how much money is going on this project.

The answer, unfortunately, is that we do not yet know, although one report (of many) makes it clear that funding is likely to be substantial:

Starting in 2004, however, EU funding for transport infrastructure improvements in Central and Eastern Europe will greatly increase for the new member countries. Moreover, further increases are planned around 2007, when the EU is scheduled to initiate its new 7-year cycle of European Regional Funding, which will for the first time include the new EU members in Central and Eastern Europe. The specific EU-approved projects and funding levels for these future years have not yet been determined, but it is certain that the EU will be providing a substantial portion of the funding. The overall increase in funding will facilitate the completion of planned projects that had been delayed by lack of financing prior to joining the EU.

There is also the matter of the €300 million being spent on "a Master Plan for a big, complex project", devoted to "Water Supply and Wastewater Treatment in Warsaw", one of many infrastructure projects in the former Soviet satellites of Central and Eastern Europe.

One would have to have a heart of stone not to agree that these countries - torn apart by a terrible war and then occupied by the Soviets for nearly fifty years – are not deserving of considerable assistance, and it is right and proper that Britain should help out.

But therein lies the quandary. It is not as if Britain itself could not benefit from major spending on infrastructure – my own colleague is voluble on the manifest failings of the London Underground (although we would die for a comparable system in Bradford) – and the ever-increasing water bills testify to the costs of meeting the burden of upgrading Victorian sewers and water pipes – costs which have been substantially magnified by the impost of EU directives.
But all this misses the point or, to be specific, two central points. The first is that the accession countries do not need the money – or would not, but for their membership of the European Union – and the second is that Britain is already paying more than its fair share.

On the first point, what people tend to forget is that, as well as being recipients of EU largesse, the accession countries themselves pay into the budget and, because of the niggardly settlement at the 1999 Berlin European Council, where CAP subsidies were held back, the current budget structure would have made some of the poorest countries in the Union into net contributors, while manifestly more wealthy countries like Spain and Ireland would have continued to be net beneficiaries.

The problem here is that, on joining the EU, the accession countries inherited, amongst other things, the CAP, where they are now obliged to remit huge amounts of money to Brussels, only to have that money paid back to farmers through the agricultural subsidy system. In a country like Poland, however, where the average monthly farming wage is in the order of £200 a month, where labour, land and input costs are low, the sector is already highly competitive, as evidence by the massive flow of Western capital. The last thing the sector needs is over-generous subsidies, the effect of which will be to distort completely the economy and labour market.

But, tied in to this absurd merry-go-round, the accession countries which would otherwise be devoting money to infrastructure and regeneration of industry, are forced to spend on areas such as agriculture, which they do not want to and should not be paying. But, saddled with this unnecessary burden, they now need financial assistance to pay for those projects which they cannot now afford.

Turning to the second point, much is now made of the fact than, when Thatcher negotiated the rebate back in 1986, Britain was then amongst the poorest countries of the Community whereas now, it is one of the wealthiest. But what this neglects is that the budget contribution is calculated according to GDP. This means that, as Britain’s wealth has increased, perforce it has paid more into the Community budget.

Another point which has also been overlooked is that, while the other major players have excluded accession country citizens from their labour markets, the UK had adopted an "open house" policy, with the result that we have an estimated 500,000 migrant workers from the accession countries, many of whom remit part of their earnings back to their homelands. This actually represents a massive additional subsidy to these countries, of the most valuable kind, as it puts wealth directly in the pockets of real people, rather than inefficient state governments.

There is also a tangential point, which Blair made in an attempt to justify his scaling-back of the budget, and that is that it takes time to spend large amounts of money. Vast infrastructure schemes cannot be worked up overnight, and take years and sometimes decades to complete. As it stands, on all their EU funding accounts, most of the accession countries are under-spent, as indeed is the EU budget. Throwing more money at them is likely to increase stress on the system, lead to poor spending decisions, waste, mismanagement and, inevitably, fraud.

Putting all that together, there is one other point that needs to be made. Countries with growing economies, young, well-educated populations, and good prospects, do not need gifts. As long as they are able to borrow money on favourable terms – and the system is awash with cheap loan funds – it should be quite possible (and is in fact more desirable) that these countries fund their improvements through loan capital.

As it is, they have been saddled with the worst of the socialist, dirigiste budgetary practices of "old Europe" and need cash injections to make the books balance.

Thus, what Tone has done is buy into this system, reinforcing bad practice. In adding £7 billion to the UK’s bill, he has lifted an average £350 from the pockets of every household in the land. Furthermore, he has done this without our agreement, in the context that, had he asked, he would probably have been refused.

So, do I think we should be giving money to support the upgrade of the Warsaw underground? Actually, the real question is: should we be giving money to the EU so that it can support a corrupt, decaying, dirigiste financial system that requires emerging economies to turn to the begging-bowl to fund necessary projects? The answer, here, is an unequivocal "no". We have our own corrupt, decaying, dirigiste financial system to support.