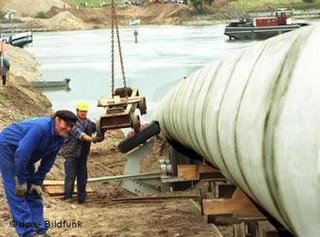 All that chumminess with Vladimir Putin has served Gerhard Schröder well. As Chancellor he gave his full support to a major financial deal between Germany and Russia that created a consortium which would build a gas pipeline between the two countries.

Nothing wrong with that. Germany gets gas, Russia gets foreign currency as well as influence. And former Chancellor Schröder? Well, he get to be chairman of the Russian gas company (now state owned to all intents and purposes) OAO Gazprom’s shareholder committee.

“Less than a month after leaving office, Me Schröder is set to become chairman of the supervisory board of the North European Gas Pipeline Company, which is building a €4 billion pipeline between Russia and Germany. Gazprom, the state-owned Russian energy giant, holds 51% of this company. Welcome to the Kremlin, Mr Schröder.”

The deal and the then Chancellor Schröder’s references to his buddy Vladimir as a “flawless democrat” were rather controversial even at the time. For one thing the new Baltic pipeline is more expensive than some alternatives could have been.

For another it bypasses Poland, Ukraine and the Baltic States, thus giving Russia a far greater leverage over the countries, described by the WSJE as her “former vassals”. And guess what? Gazprom is pressing for higher natural gas rates in all those countries.

With Herr Schröder showing such wonderful acumen in his plans for his retirement the controversy will probably revive.