When the deal was done 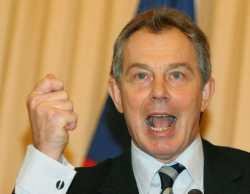 As we struggle to come to terms with the small-print of EU budget settlement, a commission document has re-emerged which shows that Blair's surrender was pre-ordained, ever since July of last year.

There is nothing secret about the document, except that, probably, the best way of keeping a secret is to publish it in an obscure technical document, which is precisely what the commission did. After all, how many of you actually read, "COM(2004) 505 final, Volume II, Technical Annex: Financing the European Union Commission report on the operation of the own resources system", published on 14 July 2004?

Strangely, we did pick it up on 19 July 2004, when it was highlighted by Michaele Schreyer, the Budget Kommissar, as we called her, but even we did not fully appreciate its significance. The MSM ignored it.

Still available on the net, in clinical detail the document sets out all the reasons why the British rebate had to be reduced, and even offered various options for its reduction, one of which Blair actually adopted.

The problem, of course, goes back to the Thatcher's Fontainebleau agreement in 1984, when the "colleagues" agreed to a rebate (or "correction") on the UK contribution, returning 66 percent of the difference between gross contributions and receipts, a situation that survived until last week when Blair offered his spectacular surrender.

This is pointed out in the commission document, which records that "Estimates indicate that over the period 2007-2013 the UK correction will increase by more than 50 percent compared to the average over the latest 7 years to reach an estimated € 7.1 billion from € 4.6 billion in the period 1997-2003." It then goes on to say:

Although the envisaged enlargement to 10 new Member States was unanimously agreed at the Berlin European Council in March 1999, the UK insisted and obtained that enlargement-related expenditure be taken into account when calculating the UK correction, thus shielding it from most of the financial consequences of enlargement. That is the main reason for the expected future increase in the UK correction.

This is interesting, in that this was the agreement that locked in stone the CAP spending, from which France so much benefits so, while the CAP agreement remained inviolate, the rebate was a different matter.

But it then pointed out that, if the current system continued, the UK net contribution would drop from a potential 0.62 percent GNI (without correction) to 0.25 percent GNI, the lowest rate for all the expected net contributors except Finland (on 0.21 percent), way below the Netherlands at 0.56 percent, Germany at 0.54 percent and even France at 0.37 percent.

With chilling logic, the commission then concluded:

According to these estimates, the UK will become (together with Finland) the smallest net contributor to the EU budget… The persistence of such a growing anomaly risks undermining the legitimacy of EU policies in general, particularly in new Member States. The current system of a unique correction for the UK therefore cannot continue.

And that, was basically it - the die was cast. The commission had decided in July of 2004 that "the current system of a unique correction for the UK therefore cannot continue", and continue it did not.

What the commission then did in the report was offer a series of options for reducing the rebate, one of which was to freeze the level at the current rate. Another was to bring down the rebate to 33 percent but another was to exclude enlargement-related expenditure. This was the option Blair chose, but it was not his – or the UK's – idea. It was one of the "choices" given to him by the commission.

The deal, therefore, was not primarily to increase the amount of money that went to the enlargement countries, but to spread the load amongst the ten expected net contributors, with France becoming a major beneficiary of Blair's largesse.

But the central point, which we made at the beginning of this piece, was that this was all pre-ordained in July last year. The commission document was actually published on the same day as Lord Butler's report into the use of intelligence in the run-up to the war with Iraq, and that week there was the small matter of two by-elections in the supposedly "safe" Labour seats of Leicester South and Birmingham Hodge Hill, plus Gordon Brown's Comprehensive Spending Review.

Blair was under intense political pressure in what was regarded as one of his worst weeks in politics since the 1997 election. And was he going to then announce that he was "under instructions" from the commission to reduce the "Thatcher" rebate? Clearly he did not, neither then or later – until after the event.

If there ever was a case for reducing the rebate, Blair blew it by keeping his cards to his chest, and the public in the dark.