The guy needs a job, OK? 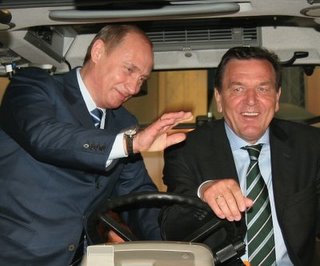 Former Chancellor Schröder seems to be rather indignant at all the fuss about his new job given to him by his best friend Vladimir Putin.

He told the newspaper Süddeutsche Zeitung:

“Politicians and the media have spread much nonsense recently. I am only 61 years old; I want to work and not stay at home and get on my wife's nerves.”

Fair enough, but that is not precisely what has been exercising the German media or German politicians. Of course a 61 year old man can work and there are plenty of jobs around that a former Chancellor of Germany can have. There are directorships, and seats on NGOs and highly paid positions in various tranzi organizations. In his spare time he can write his memoirs or write children’s books or whatever.

The problem is that his is being offered a directorship in a consortium, whose creation has been quite controversial and one that he pushed through in the last weeks of his chancellorship.

If one adds to that Chancellor Schröder’s invariable praise for President Putin as a flawless democrat, despite the horrors of the Chechnyan war, the dubious legality of the Yukos case, the abolition of regional elections and the gradual destruction of media independence; if one remembers the Chancellor’s refusal to become involved in the Ukrainian events of last December while Poland and Lithuania negotiated a deal that enabled the Ukrainians to vote freely for the government they wanted; then one can understand why so many people (including us on this blog) are holding their noses.

There is another delightful aspect to the whole saga as described by the UPI Germany correspondent:

“Further adding to the allegations that Schroeder's job might be a 'thank you' from Moscow is the appointment of an alleged former communist spy as chief executive officer of the consortium.

Matthias Warnig -- according to media reports he denies -- has until 1989 been a high-ranking member of the communist East German intelligence service Stasi. Warnig in recent years served as the Dresdner Bank's head in Russia.

The Dresdner Bank was the first German bank to open a branch in Russia in 1993. Warnig, according to the business publication Manager Magazin secured the deal in St. Petersburg, after meeting a young city official named Vladimir Putin. Warnig and Putin became close friends since then, others say Warnig knew Putin from his days as a young KGB agent in Dresden. Both men deny such reports.”

Whichever way one looks at the story of Matthias Warning, Vladimir Putin and Gerhard Schröder, it is safe to say that Chancellor Angela Merkel will be embarrassed by her predecessor’s behaviour for some time to come.