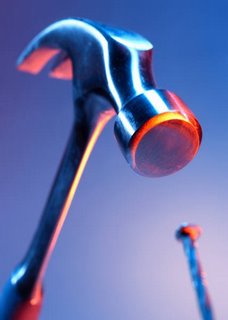 It seems the therapeutic value of smashing nails into inanimate objects is much overstated, as a day of assaulting timber of varying lengths has done little to improve my demeanour – although it did set me pondering as to why two short planks should be regarded as "thick", when they seem to have exactly the same dimensions, in the thickness department, as their longer brethren.

Anyhow, in the nail-braying stakes, Tony Blair could well be at a pitch where he is imagining planting short lengths of steel in the face of M. L'Escroc Chirac, or possibly even dispensing with the nails and going straight for the hammer – although the idea of a staple gun does seem particularly attractive.

So far, having had L'Escroc airily dismiss his budget plan, our revered leader is due to spend a second day meeting the “colleagues” from assorted member states in a vain attempt to carve out a new deal. In line for the Blair treatment are the leaders of Greece, Belgium, Spain, Luxembourg and the Irish Republic, having met yesterday with the prime ministers of Portugal, Finland, Slovenia, Sweden and the Netherlands on Thursday.

In what must be an example of hope triumphing over experience, Blair's spokesman has admitted that "no-one seems to be happy at the moment with what is on offer," but nevertheless believes a deal is not impossible. Well, a meteor hitting Downing Street is not impossible, but…

With that, Blair is set to come up with a revised offer, which inevitably means he will be thinking of giving away even more of our money, but there is now very little time left. On 15-16 December when the European Council must decide whether to go with Blair, or hold out for a better deal under the Austrian presidency.

My guess is that the colleagues might be better off trying to nail Blair down, and take what is on offer… but if our leader does embark on an even bigger hand-out from the taxpayers’ purse, on a domestic front this could be the last nail in his coffin.