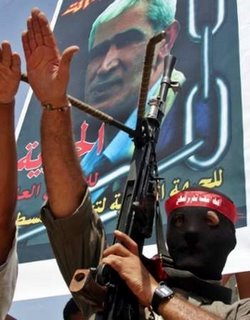 Javier Solana is not a happy bunny. Well, to be fair, he is rarely happy, since there seems no way he can convince the rest of the world that he represents a genuine power with a genuine foreign policy.

The one thing he was always rather proud of is the extraordinary amount of financial help and political support the EU has always given the Palestinian Authority, particularly the late unlamented mass murderer and thief Yasser Arafat. What Señhor Solana (and come to think of it Chris Patten, now Lord Patten) could never quite explain is how it is that so little of the enormous amount of money the EU pumped into the Palestinian Authority ever reached the people of that benighted region.

But now Solana is seriously worried. Hamas the terrorist organization that makes no bones about the fact that it is behind most of the suicide/homicide attacks in Israel (that have continued since the withdrawal from Gaza) as well as conducting a campaign of terror against the Palestinian population, has done rather well in the municipal elections in several West Bank cities.

This may be because Fatah, Mahmoud Abbas’s organization is seen as rather soft on Israel or it may be because Fatah seems to be splintering into smaller groups. Either way, there is a serious worry that Hamas may do well in the forthcoming Palestinian parliamentary elections.

The House of Representatives has already passed a resolution, threatening to withdraw American support for a Palestinian government if Hamas joins it, the latter being on the American list of proscribed terrorist organizations.

According to Voice of America, Solana is beginning to sound as if the EU might possibly follow suit (though, of course, not being a democratic organization, the decision will be taken by the High Representative himself with possible contribution by the Commission.)