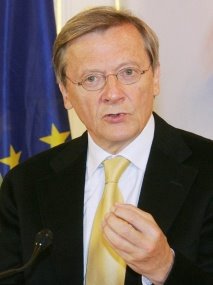 If Tony Blair had said it on the eve of the British presidency of the EU, all hell would have broken lose, with multiple condemnations our beloved leader and his "negative" approach to the European Union.

But seeing as it's only Austria, it doesn't aeem to matter chancellor Wolfgang Schuessel, only hours before his country assumes the presidency, has complained that the European Court of Justice has overstretched itself by extending European law into areas of national competence.

The court in recent years had "systematically" widened its competences "even into areas where there is firmly no Community law", he added, citing past court judgements on women serving in Germany's armed forces and the admission of foreign students to Austrian universities. Both concerned areas of policy that should clearly be governed by national law, he said.

However, his remedy is not one that even our beloved leader would have countenanced. According to Reuters, in an interview with the Sueddeutsche Zeitung newspaper, Schuessel suggested EU member states should consider whether a new higher authority was needed to "legitimatise" the court's actions.

It looks like he is suggesting that we have yet another layer to the European Court, a new "supreme" or appeal court. And even if the idea does not meet with the approval of the "colleagues", it can hardly be dismissed as evidence of Euroscepticism.

That notwithstanding, it does rather prove the contention of Victorian mathematician, Augustus de Morgan: "Great fleas have little fleas upon their backs to bite 'em, and little fleas have lesser fleas, and so on ad infinitum."