Normal service to be resumed 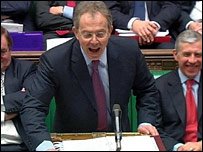 I watched part of the prime minister's statement on the European Council yesterday, and thought the Conservatives' attack lacked focus and passion – in a chamber that was only just over half full. It had all the hallmarks of Cameron going though the motions. It was thus interesting to read the two "pro-EU" papers this morning, the Independent and the Guardian, to see what they made of it.

The Independent had it that Cameron accused Blair of "total failure", while – rather predictably - Blair rejected the criticism, going on to the attack about Cameron’s plans to have his MEPs leave the EPP.

The "killer point" from Cameron – and several others, including Alex Salmond, was the question of how Blair would finance the increased payments: "How is the Chancellor going to pay for it: more taxes, more borrowing or cuts in spending? Which is it?" Cameron demanded, question that Blair ignored.

Then, the Independent observes, the Tory leader's attack appeared to stall as Blair challenged him to support the EU's decision to switch resources from richer nations, including Britain, to the accession members. "You support enlargement, right? Yes? You support wealthy countries paying for the poorer countries? That is right, isn't it? But you don't support Britain paying any money for it. You are in favour of enlargement but refuse to follow it through. The consequences of that position is that you are not exercising leadership. You are abdicating leadership."

Watching that bit, I thought Blair was also going though the motions – irritation rather than passion - but it was indeed enough to stall the Tory attack.

The Guardian, however, decided it was anger, headlining its story, "Angry Blair defends EU budget deal". He told MPs, the paper says, that it was in Britain's own economic interest to pay an extra £2.7bn a year to the accession countries. "They are our allies. It is our duty to stand by them. But it is also massively in our interest."

Altogether, it tried to be "Punch and Judy" knockabout politics, but it did not succeed on any level. One wanted to see Cameron land the knockout punch, but even the right words failed to make an impression. Blair walked away unscathed, and the chamber emptied quickly as the debate on police re-organisation started.

That evening, the Beeb headlined that evening on the smoking ban and the education White Paper, barely mentioning the budget, while the website recorded, "Blair slaps aside Euro attack". Normal (Europe-free) service, it seems, is about to be resumed.