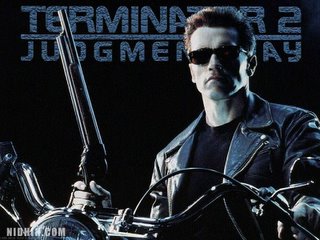 One of the recent events that prompted European outrage with the United States and, specifically, with the State of California, was the execution on December 13 of Tookie Williams.

Williams had been on death row for 24 years, having been found guilty of the murder of 4 people during raids by the Crips gang that he had founded. He and his gang seem to have inspired others to follow in their footsteps and the full tally of crime that he was responsible for directly and indirectly is far greater. As is the case in America, there have been numerous appeals.

More recently Williams became a hero to the American left and, through them, particularly the Hollywood fruitcakes, some of the more aware Europeans. Williams had written various children’s books, in which he warned against gang crime. He was even nominated for the Nobel Prize (I assume it was for literature, but it could have been the peace one).

Anyway, come December 13, Governor Arnold Schwarzenegger, unimpressed by arguments about Williams's putative saintliness, allowed the execution to go ahead and a whole new row broke out. Europeans who mostly had capital punishment in their countries until a couple of decades ago, stormed and wept and ranted.

“Six decades after World War II, opposition to the death penalty remains deeply entrenched in Germany and Austria, a stance resulting from remorse for the evils committed by these countries under Adolf Hitler and an attempt to prevent future state-sponsored killing.”

I have a strong suspicion that the stance on capital punishment was imposed on those two countries by Britain and America.

Without opening a discussion on the rights and wrongs of capital punishment, which is not a theme on this blog, I do beg leave to doubt that the execution of a condemned gangster and multiple murderer in any way resembles the horrors of the Nazi regime.

There is an odd sort of theme there, one to which I hope to return in a future posting. The theme was taken up recently by several American commentators. Europeans spend a great deal of time fearing and expressing fears of fascism in America. The truth is, however, that it is in Europe that all sorts of seriously unpleasant dictators turn up with monotonous regularity.

Foremost in the weeping and gnashing of teeth (and equating Tookie Williams with the millions of victims of the Nazis) was Graz in Austria, the birth place of Arnold Schwarzenegger.

Led by the Socialist-Democrat, Communist and Green politicians a petition was started for the removal of Arnie’s name from the stadium (to which the Governor had contributed a good deal of money). In fact, some people suggested that the stadium should be renamed after Tookie Williams.

The conservative mayor Siegfried Nagl put up some opposition but not a great deal. Graz, its politicians proclaimed proudly, is the “first human rights city in Europe”. It is not quite clear what that means. According to the Frankfurter Rundschau, as quoted in the Wall Street Journal Europe, the local discos and bars routinely reject dark-skinned customers but this does not seem to disturb the image the good burghers have of their city.

Unfortunately, the burghers of Graz also made a mistake about Arnie. As the WSJE puts it:

“Well, if the townspeople in Graz expected Mr Schwarzenegger to simply hold still while they blackened his reputation, they probably hadn’t followed his career very closely. Mr Schwarzenegger didn’t become a world body-building champion, international movie star and governor of California because he was a typical son of this Austrian province.”

Governor Schwarzenegger’s response was swift and pre-emptive. Pointing out that as Governor of California he will most probably make other decisions of this nature, he now wished to spare his birthplace and its politicians and inhabitants any further embarrassment.

“To spare the responsible politicians of the city of Graz further concern, I withdraw from them as of this day the right to use my name in association with the Liebenauer Stadium.”

Furthermore, Graz would not be allowed to use the Schwarzenegger name to advertise and promote itself and, to add insult to injury, he was returning the ring of honour the city had bestowed on him.

“Since, however, the official Graz appears to no longer accept me as one of their own, this ring has lost its meaning and value to me. It is already in the mail.”

The expression that springs to mind is “Hasta la vista.”

Too late the city of Graz realized what it had done. As the mayor pointed out, the damage to tourism might run to several millions of euros. Last heard of, Mayor Nagl was pleading with Arnie not to cut his ties with the city of his birth.