Good news on the blogosphere 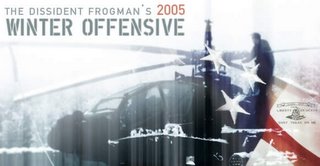 January and February were dark months on the blogosphere. First the dissident frogman, a breath of sanity out of France stopped blogging, then The Diplomad, the voice of the dissidents in the State Department fell silent.

Many of the American blogs have been doing a round-up of those who have not lasted the year and whose absence has been keenly felt. All of them listed the two above. In response to the Mitch Townsend’s posting on Chicagoboyz, the dissident frogman replied and suggested that we all have another look at the blog.

And sure enough, it has been resurrected in its full bilingual glory. His posting is called The dissident frogman’s 2005 winter offensive and to give our readers some idea of the style and content, let me quote his list of enemies:

Go on, spoil yourself. Read the dissident frogman. For one thing he makes us look calm and easy-going.