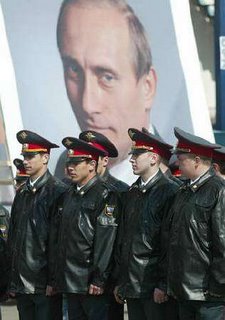 A year or so ago, Mark Leonard the all-round wonderboy of the europhile movement, proudly proclaimed that the EU was quietly but certainly influencing developments in countries as far apart as Rwanda and Russia. At the time I wondered whether he would not regret making that statement. Probably not though almost anyone else would.

Even now Rwanda is hardly the country, whose political development is particularly praiseworthy and if the EU has really had some influence there, one would like to know what that was.

But Russia remains the real problem. As it takes over the presidency of the G8 group of countries, a law has been passed that severely curtails the activities of non-governmental organizations; the media is almost entirely controlled by the government (most recently an administrative error was used to stop the BBC Russian Service in Moscow from broadcasting in Russian); the economy is being centralized with the state controlling the energy industry and acquiring control over machine production; and the setting of gas prices is used as a political weapon to influence or punish former Soviet states (and bribe former German chancellors). While the horrors of the Chechnyan war go on and on.

The upper house of the Russian parliament, the Federation Council, has today voted 153-1 in favour with 1 abstention for the Kremlin-sponsored legislation to control non-governmental organizations, particularly those that engage in what might be described as political activity or receive money from abroad, regardless from the actual source.

The law will come into force as soon as President Putin signs it.

Although the original draft was softened somewhat with regards to large international organizations, Russian ones will bear the full brunt. As Mosnews reports:

“According to the bill, all of the country’s 450,000 NGOs will have to re-register with a state body. Foreign NGOs will have to send notification to the Federal Register Service outlining their funds and plans. Some groups have said the law would also expose them to a heavy tax burden. NGOs may not be registered if their goals “oppose the Constitution and Russian law, threaten Russia’s sovereignty, political independence, territorial inviolability, national unity and originality, cultural legacy and national interests”.”

As President Putin appears to support that group of historians and political thinkers, which considers autocracy to be part of Russia’s “cultural legacy and national interests”, the outlook for Russia’s fledgling civil society is bleak. Some of the human rights organizations are talking of going the European Courth of Human Rights as Russia is a member of the Council of Europe, an organization that supposedly aims to promote democracy.

It is no secret that President Putin’s worry is that one of those many-coloured revolutions might hit Russia, so he and his henchmen are doing their best to prevent such a development.
At the same time Gazprom is putting pressure on the former Soviet republics, particularly Ukraine, Putin’s bugbear since the triumph of the orange revolution, by increasing the gas prices.

Gazprom’s argument is that the prices have, until now, been considerably lower than world market ones and it is time the former Soviet republics learned to behave like grown-up countries. Curiously, this does not apply to Belarus, whose President Lukashenko is working hand in glove with Putin on the blocking of the coloured revolutions.

Ukraine, who is going to be hardest hit, has acknowledged that Gazprom has a point but said that the rise should be introduced gradually. Gazprom refuses and as of January 1 Ukraine will have to start paying $220 per 1,000 cubic metres as opposed to the present $50.

Price rises for other countries seem to be erratic. For Moldova the price is going up from $70 to $150-$160; for the Baltic states from $80 to £120; for Armenia, which is trying to reduce its energy dependence on Russia by building a pipeline with Iran, the price is doubling from $56 to $110; for Georgia that has blocked Russian attempts to buy a stake in its pipeline the rise is by 70 per cent to $110.

This move is seen as part of a political game of putting pressure on what President Putin considers to be Russia’s economic space, though the countries in question see themselves as being independent.

As Judy Dempsey notes in the International Herald Tribune, however, Gazprom’s action may well push the countries in question towards reform and diversification in the energy sector. Russia may not do as well out of this in the long run as it hopes to.

Meanwhile the last link with President Putin’s early liberal economic ideas are being severed by the resignation of his economic adviser Andrei Illarionov, who has announced that he could no longer work for a government that was leading the country towards greater centralization and stifling freedom.

Illarionov was marginalized some time ago, as Putin turned away from his policies. In particular, he lambasted the forced sale of Yukos after Khodorkovsky’s imprisonment as “the swindle of the century”. He was immediately deprived of his position as Russia’s ambassador to the G8 group. It is, therefore, appropriate that he should resign finally (though Putin’s office is insisting that Illarionov is to be dismissed) just as Russia takes over the presidency.

Illarionov’s position has been a matter for conjecture both in Russia and the West for some time. Some considered that he had lost all influence, others that he was kept on as a kind of court jester – the man who can be relied on to speak up against sycophantic courtiers.

It seems that the court jester’s time is up.