And now for the pay-off 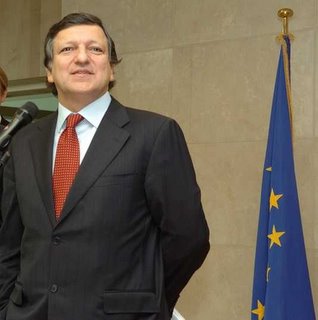 If leaders of EU member states are thinking, “never again” after two bruising European Councils on the budget, El Presidente José Manuel Barroso is the man for them.

To avoid any more of these interminable negotiations, Barroso says the EU cannot continue to bargain in the same old fashion – a "zero sum game". "We have to find a way of avoiding such a direct link between national budgets and the European budget," he says. "We have to think about some reform of the resources of the EU... We should look at a system... that would go beyond negotiations between countries."

And what does he have in mind, you may ask. Well, this is the old saw, an EU tax, collected directly from "EU Citizens". And before you write off the idea, El Presidente says he has "a strong mandate" for such an exercise. Didn't last week's European Council, with Blair in the vanguard, ask the Commission to review the budget by 2008-09? And that is what El Presidente is going to do, "…without taboos," he says.

In so doing, he has the support of Wolfgang Schüssel, Austrian chancellor, Edmund Stoiber, Bavaria's chancellor, and Sarkozy. Angela Merkel is also said to have also expressed interest.

Of course, taxation is one of Blair's "red lines", so we know it can't happen – don't we?