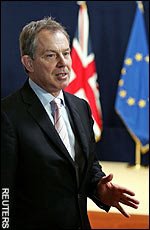 In contrast to the "pros", coverage of yesterday’s prime minister's Commons statement on the European Council in The Daily Telegraph was rather low key, predictably so, given the lack of drama.

Although the piece is headed, "PM faces storm of protest on rebate", it was – as we recounted earlier – anything but that, and the Telegraph coverage reflects the lacklustre nature of the occasion.

The Times tries a little harder, with the headline: "Rebate lost with little in return, say Tories", but is still struggling to turn a sow's ear into a silk purse, leaving the online edition of The Telegraph this morning to inject some fire into the issue with its account of Blair's treatment in the EU parliament.

There, at least, there seems to have been some passion, with Blair claiming that the budget was "fair", only to be denounced by Messrs Helmer and Farage, who accused the prime minister of being "outclassed and outflanked" by France. Farage wanted to know why one euro from the budget should go to "new sewers in Budapest" when public services in London were crumbling.

An obviously irritated Blair hit back at what he called political "reactionaries", pointing at Farage and Helmer, replying, with rising anger and to applause: "You sit there with our country's flag - but you do not represent our country's interests."

Returning to yesterday's Commons statement, the Hansard record is now available and scrutiny of the text does confirm that Blair was assiduous in avoiding the question of how the £7 billion largesse is going to be paid for – "more taxes, more borrowing or cuts in spending", as Cameron put it.

Instead, we got a spray of statistics from Blair, calculated to obscure and confuse, rather than illuminate, with which Cameron failed to engage. Blair's point was that we are not the only ones "paying for enlargement". Although our net contributions will increase by 63 percent, France's was to increase by 124 and Italy by 126 percent.

Considering that, in 2003 (the latest year for which official figures are available), the UK made a net payment of €3.8 billion while France gave €1.7, the respective increases (using that year as a baseline) mean that the UK still gives €6.1 compared with France's €3.8 billion, the amount coming from the UK still vastly in excess of the French contribution. What that goes to show, of course, is that you can prove anything with statistics.

For this in a mood for self-flagellation, the detailed agreement on the "Financial Perspective" is on the net, all 35 pages of it, and about as clear as mud. One thing that brought a wry smile to this cynical blogger's face was the passage on administration expenses.

Taking account of the objective factors determining the current level of administrative expenditure, relating to enlargement, increased operational activity and the effect of the new Statute, and savings made possible through efficiency gains and economies of scale…