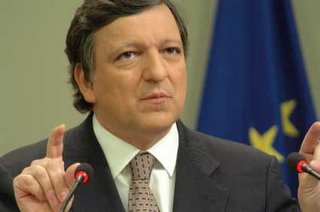 The UK has offered a revised EU budget package, adding €2.5 billion to overall spending, raising it to €849.3 billion or 1.03 percent of EU members' GDP – only to have Barroso dismiss it with alacrity, declaring that it was "simply not enough".

Putting the boot in further, he then added that the UK is "not realistic" in making cuts to its budget rebate conditional on reductions to European farm subsidies.

Jack Straw – who made the offer - got an equal dusty reception from French foreign minister, Philippe Douste-Blazy, who told his own Senate: "We hope that the British authorities will understand the need for a complete review of its rebate mechanism. Without a change on this point, France will not give its agreement."

A top German official, meanwhile, has said in Berlin: "The danger of failure remains considerable. There is still no solution in sight," only to elicit a dead-bat response from a British spokesman who said: "We will see no better deal this week or next year." But Barroso disagrees. The real negotiations on the budget will start at the summit itself, he says. "It will not be the last proposal, I am sure."