Russia and Ukraine stare each other down 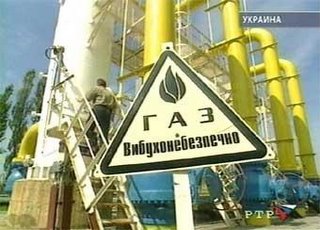 Gazprom insists that if Ukraine does not agree to pay the quadrupled prices for gas, the supply will be stopped on January 1. And, as the Daily Telegraph reported today:

“Gazprom said yesterday it had bought up all the gas that will be exported from Turkmenistan in the first three months of next year - gas which otherwise would have flowed to Ukraine.”

“The Russians have also bought a section of pipeline that runs through Belarus in exchange for cheap gas. The deal will help secure at least one route for Russian gas into western Europe and weaken Ukraine's bargaining position.”

The Ukrainians are saying that they have enough gas to last them through the winter but would like to negotiate about phasing in the price hike.

President Putin distanced himself rather grandly from the whole mess, accusing both sides of creating a crisis needlessly. Then he offered Ukraine a loan of up to $3.6 billion (an enormous sum for Russia). In all probability prudently, President Yushschenko rejected it. A loan of that size would put Ukraine even further into Russia’s power.

So far so difficult. The European Union has refused to intervene or even mediate. As we know from past experience, it has never been able to come to any kind of a conclusion about problems that happen on its doorstep.

There is, however, another aspect to the story. Russia not only sells gas to Ukraine but pipes the gas intended for western Europe (about 30 per cent of its supply) through that country and there is a possibility of that coming to a halt as well. This would mean another price hike, over and above the one already promised for next year.

To this the EU had to respond by convening a meeting of its gas industry experts on January 4.

“Gazprom chief executive Alexei Miller said there was a "detailed plan" to ensure that supplies transiting Ukraine to the EU would not be disrupted.”

He did not explain what those detailed plans were but Germany has become worried enough to call on the two sides to settle the dispute as soon as possible.

Clearly, Russia wants to become an important player on the energy scene and is not too particular about its methods. As we have said before, the problem is not the raising of the price, but the way it is being done. And the Europeans had better take note of Russian business methods.