Will there be a "French CNN"? 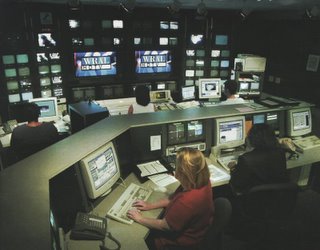 Some time ago we reported on French plans to set up what was rather grandly described as the French rival to CNN, Chaine Française d'Information Internationale, a partnership between Paris-based Television Française 1 SA, France's most-watched station, and state-owned competitor France Television.

The French political establishment felt aggrieved that the country was presented in a “biased” fashion. For instance, in the run-up to the Iraq war and during the military offensive, numerous American media outlets were critical and, worse, sarcastic about the French attitude. This did not improve with the discovery that various French ambassadors and politicians had been getting a rake-off in the food-for-oil scam.

It is just as well that Dominique de Villepin did not see the many jokes that were going round the internet.

Then again, last month’s riots were broadcast all over the world and, it was felt, that these broadcasts did not show the country in a flattering light. (Don’t suppose anyone in France was all that worried about the British media, which, as we wrote repeatedly, was extremely slow to pick up on what was going on around Paris.)

Zut alors! Up with this they will not put. As the Culture Minister, Renaud Doideu de Vabres, said at press conference last month:

“Who hasn't felt the need for our vision of information, soaked in the values of democracy that France heralds in the world, to be defended?”

Lots of people, I should imagine, given the French media’s inability to criticize the country’s government most of the time. France was the only country in the western world that had no public debate about the Iraqi war. L’escroc Chirac’s stance was right and admirable and that was that. Anyone who disagreed, like Bernard Kouchner, was hustled off the programme and not invited back.

Of course, there is a problem when it is a state-sponsored organization that tries to compete with a private one, like CNN. Because the government, that is the taxpayer, has to fund it all and there is not a great deal of money to throw around, even with Tony Blair nobly giving up our rebate on our behalf (without asking us, naturally).

According to Bloomberg, the new channel, should it ever go on air, will have a budget of €70 million or $85 million. CNN’s annual budget is reckoned to be $550 million.

And that’s not all.

“Headed by Alain de Pouzilhac, the former head of Paris- based advertising company Havas SA, the new channel will have 170 journalists focusing on news from Europe, the Middle East and Africa in French, English and Arabic.

That compares with about 4,000 staff at CNN, owned by New York-based Time Warner Inc., and 2,050 journalists at British Broadcasting Corporation.”

That last figure refers to BBC World rather than the whole of the BBC, which is considerably larger.

The new channel will have to compete with more than just CNN or BBC World. There are something like 70 international channels around, including the new Russian RIA Novosti.

Then there is the problem of the fractious relationship between the two component organizations. France Television unions are chaffing at having to work with the private sector, insisting that public TV had everything it needed to go it alone.

The channel, needless to say, is not expected to make a profit.

The need for it remains questionable, as Roland Cayrol, director of polling company CSA and a professor of politics and the media at Science Po Paris.

“France already has a global French TV channel. TV5 Monde is broadcast in 200 countries and 3 million hotel rooms across the world, and gets 65 million euros a year in state funds. Radio France Internationale broadcasts news in 19 languages, and Agence France-Presse is among the world's largest news services.”

But none of them, in his opinion, can qualify as a “true, serious French international television”. Nor are they, presumably, soaked in the values of democracy that France heralds in the world.