Chipping away at the edges 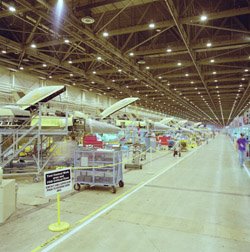 A muddled piece by Rory Watson in The Times today announces that "Brussels" is moving to "open up defence contracts".

This is a report based on a press statement yesterday from the Commission, following an announcement by Charlie McCreevy, the Internal Market Commissioner, on defence procurement.

Watson sees it in terms of the Commission preparing legislation "to make it easier for foreign companies to bid for lucrative defence contracts throughout the European Union", marking "a new attempt to extend the EU’s public procurement rules to a key sector of Europe's economy". He cites McCreevy saying: "Action to clarify and improve EU law on defence procurement is imperative. We must put our foot on the gas. The future of Europe's defence industry is at stake."

In a new communication, therefore, the Commission picks up on the threads of its arguments in the green paper, and its concern that member states (with the exception of the UK) were invoking the "national security" derogation afforded by Article 296 of the Treaty to exempt nearly all defence procurement from the provisions of the EU's procurement directives.

On the basis of its consultation, it now proposed to publish in the New Year a non-legislative "interpretative communication" setting out with greater clarity where Art 296 does and does not apply and, for those defence materials which, under the new regime, fall outside the scope of the Article, it is to propose a new procurement directive – acknowledging that the current procurement rules are not entirely appropriate for military spending procedures.

For the materials that remain covered by Art 296, the Commission intends to rely on the recently agreed "voluntary code of practice" although, as it remarks, it will follow it "with great interest".

So far, therefore, we see the predictable path of administrative encroachment, but there is also a very dangerous sting in the tail. "As the interpretative communication will also concern issues related to the free movement of goods," the Commission says, "it could have further consequences e.g., on intra-EU transfers for defence goods," adding, "This will be duly taken into account…".

This is precisely what we warned about in Wrong side of the hill where, slowly, step-by-step, the Commission will take control of arms regulation, first within the Community and then in terms of exports, leaving the member states entirely dependent on the EU as to what materials they can buy and under what circumstances.

By such means does the Commission chip away at the edges, further reducing national independence.