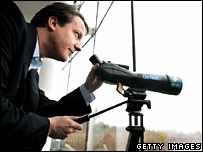 David Cameron, the Boy-King of the Conservative Party, says he will be prepared to take “tough decisions” in about eighteen months’ time. It is not so much the timing that bothers me but the fact that he seems unable to open his mouth without producing another Blairite slogan. Is he going to be tough on crime and tough on the causes of crime or can he not recall that one?

So what is he going to be making tough decisions about?

“The real test will come in 18 months time when we have to show we are prepared to take the tough decisions necessary to meet the carbon reduction targets and other environmental challenges.”

I am not sure what he thinks the real test will be but if all he can produce is vast amounts of hot air full of outdated platitudes (sorry about quoting the Labour party on this one) then little will be achieved.

According to the BBC

“Mr Cameron also wants a new independent carbon audit office to measure progress on meeting the target of cutting carbon emissions by 60% by 2050.

He said he was not worried about Labour stealing his policies - in fact, he wanted that to happen so action was taken.

Climate change was an "inter-generational problem" which needed to be taken out of politics, said Mr Cameron.”

Something to that theory of “inter-generational problem” but Cameron belongs mentally to the older, outdated generation, just as he does in his (as far as we know) attitudes to Europe. The world is moving on, Mr Cameron. Cutting emissions is not a particularly useful way of dealing with “climate change”, even if we knew precisely what that consisted of.

More and more people, especially in the developing world are coming round to the view that the best way to deal with environmental problems is through economic and technological development.

Of course, one must remember that the Boy-King believes, or says he believes, in consensual politics. Roughly speaking that means decisions taken behind closed doors by a small group of people who “know what is best for everybody”. No wonder he likes the European Union. That is its basic principle.

So what do we have by way of a court? There are the appointments announced immediately: Osborne to carry on being chewed up and spat out by Gordon Brown, Davis, who for some reason known to himself considers defence a “demotion”, remains in Home, Hague, possibly quite a good choice, since unlike other politicians he knows history, in Foreign, Liam Fox in Defence.

Theresa May is Leader of the House of Commons. Having so far failed in every job she has held, we cannot wait to see what sort of a fist she makes of this. Will she talk about the Tories no longer being the nasty party? Will she wear her kitten heels? The political world is full of exciting questions.

David Willetts takes on education and may well be better at the issues than the Boy-King, who seems to be an old-fashioned statist on the subject of public services.

Peter Ainsworth will take on environment, food and rural affairs, which has to be an improvement after Oliver Letwin, who becomes policy director. Letwin is responsible for two quasi-political statements already.

As shadow environment, food and rural affairs spokesman he forbade his underlings to mention Europe, an interesting, if somewhat ignorant point of view. And Letwin it was, who told numerous journalists that the aim of the Conservative Party’s policies ought to be to win over Lib-Dim voters, even if it means ditching the core supporters. Even arithmetically, that is hard to justify.

The real excitement has been caused by the choice of people to lead the various policy committees. The Boy-King has excelled himself. We have Ken Clarke, who is happy to hand over all semblance of governance to Brussels, heading a “democracy task force”. I appreciate the fact that Clarke had to be rewarded for his support and could not be given a front-bench position but “democracy task force”?

Iain Duncan Smith, the born-again Compassionate Conservative, will be looking at “social justice”, another somewhat outdated concept that involves a great deal of governmental interference in everybody’s best possible interests.

But the best comes last. John Gummer, he of the BSE debacle and that famous hamburger, is at the head of the policy group on the environment. He will be advised by Zac Goldsmith, another rich little boy who plays at being a farmer, while living off the trust set up for him by his entrepreneurial daddy.

Goldsmith, incidentally, believes that it is globalization, that is trade, that has made people poor. Clearly, nobody has told him that countries that millions of people in South-East Asia have been climbing out of poverty as their countries have opened up their economies.

Presumably, Mr Goldsmith and Mr Gummer will not be campaigning against the protectionist European policies that are pushing many developing countries further into poverty. Before anybody pulls me up on this, I am aware of the fact that Zac Goldsmith preens himself on his supposed eurosceptic credentials. Unfortunately, he opposes the EU for the wrong reasons, seeing it as another globalizing, free-market institution.

Having attended a few days ago the Arthur Seldon memorial meeting (of which more in another posting) I am forcibly reminded of the truth that both he and Ralph Harris (Lord Harris of High Cross) believed when they set up the IEA and expressed over and over again.

The “liberal consensus” advocated by the well off great and the good have resulted in the destruction of savings, self-reliance and the whole great ethos of working class and middle class culture. The roots of that “liberal consensus” comes from a basic contempt these people have for those poorer or less fortunate (in some ways) than themselves. The rich liberals believe firmly that the workers or peasants in the developing countries or …. well, substitute your own category … are incapable of looking after themselves and knowing what is best for them or their families. They need to be taught, guided and regulated by their betters. Step forward David Cameron and Zac Goldsmith.