Well that is that 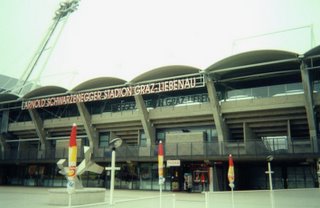 The city of Graz has followed Arnold Schwarzenegger’s instructions (or the conscience of its Green Party) and removed his name from the stadium that once again goes under the name Liebenau.

Far from being a proud proclamation of Graz’s supposed opinion of Governor Schwarzenegger’s attitude to capital punishment, the deed was done under cover of darkness and caught the locals by surprise. It is possible that not all of them follow the Green and Communist Parties notions of human rights.

Meanwhile, the ring that Arnie returned to his city, has arrived. Mayor Nagl has suggested that it might be exhibited in the local museum. He is rather worried that tourism will drop off without Arnie’s name to play around with. Perhaps, they could create, as a substitute, an exhibition of the history of Austrian human rights.