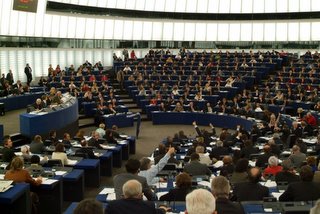 The idea was to take advantage of enlargement, detaching the Conservative group of MEPs from the strongly Federalist European People's Party (EPP), creating a new, centre-right grouping in the EU parliament under the leadership of the Conservatives, with a strongly Euro-sceptic tinge.

This was certainly the intention of Iain Duncan-Smith and the idea had its own political coherence. But there was another factor – money. Behind the scenes a secret report was drawn up, which looked at the way the UK Independence Party had organised itself.

Then with only three MEPs as part of the eighteen-strong Europe of Democracies and Diversities (EDD) Group, UKIP had managed to fund five staff from group funds, and more through pooling MEPs' allowances, then about £150,000 for each member. The whole of the EDD Group had done even better, employing over fifty group staff yet, when it came to the Conservatives within the 267-member EPP, with more than two times the number of MEPs than the entire EDD group, their dedicated group staff amounted to a meagre seven.

As part of a new grouping and employing the UKIP model, maximising the number of group staff and pooling some of the MEPs' secretarial allowances to fund joint appointments – all perfectly legal – it was calculated that the Conservative MEP group could afford a forty-strong unit, which it was intended to devote to research and policy-making – a payroll equivalent of £4 million a year.

With the deposition of IDS and his replacement by Howard, however, the plan for a new grouping was kicked into touch, with a paper thin charade arranged to "legitimise" the continued Conservative membership of the EPP, by pretending that, somehow, the MEPs were "associated" though a sub-grouping known as EPP-ED.

This, of course, was a fig-leaf which fooled no-one. At the Euro-elections, an increasingly Eurosceptic Party was increasingly at odds with its own MEPs, to the extent that many constituency parties refused to campaign for them.

Following the disastrous performance at the election, when UKIP came in with 12 seats, then leadership candidate, David Cameron, pledged immediate withdrawal from the EPP.

Even Mark Mardell, the Beeb's Europe editor, thought that, tactically it was a "brilliant move" by Cameron and when David Davis refused to follow suit, many of the Eurosceptic MEPs – not least Daniel Hannan - lined up behind Cameron.

Within half an hour of being anointed leader, Cameron confirmed he would pull the MEPs out of EPP but then passed the hot potato to his new shadow foreign affairs spokesman, William Hague. He has said in his first interview that the issue would be discussed for "many months". The promise will be implemented, he insisted before adding:

However, we will also consult with all the parties across Europe and aim to form a new grouping in the European Parliament, which I think will take some months rather than weeks.

This gives the newly re-elected leader of the Conservative group – Timothy Kirkhope - himself strongly opposed to departing from the EDD, time to work round the edges in the hope that, as previously,he can sabotage the deal and keep his group in the warm embrace of the federalists.

For the likes of Hannan, who believed that "immediate" meant just that, there is a sense of disillusionment creeping in. With resistance building to the scheme, the Eurosceptic MEPs know of old that this is an issue that is only too easy to kick into touch.

The question is, though, whether Cameron is prepared to blow away £4 million a year, that could be used to beef up his Central Office policy and research team, just for the sake of an easy life.