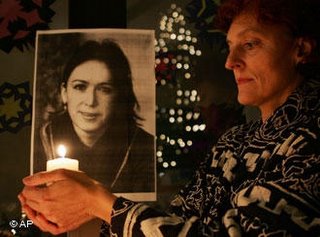 For once, this is not about the budget or any other murky financial agreements done at the European Council at the week-end. Another story of German deals has surfaced. Remember the German archaeologist, kidnapped by an unnamed Iraqi terrorist group on November 25? Well, she has been released, though as Reuter’s reports, there is a certain amount of bemusement in Germany.

It seems that the German public was “apathetic” about the capture of Susanne Osthoff, a number of people suggesting that she brought the problem upon herself by not heeding warnings.

“Osthoff's sister appealed last week to the German public to demonstrate its solidarity, but only 350 people joined her at a vigil by Berlin's central Brandenburg Gate on Wednesday evening.”

Not a whole lot of people, though more than the 100 that accompanied Cindy Sheehan in Spain on her anti-Bush demonstration. But I digress.

It seems that Frau Osthoff was not quite the German heroine one would have liked to see. In the first place, she seems to have converted to Islam some time ago. That is not a crime, certainly, but one wonders whether the gang that kidnapped her knew about it and what they thought of it.

Then again, she has spent minimum amount of time in Germany in the last few years.

“Osthoff has devoted her life to uncovering Iraq's cultural treasures and appeared an infrequent visitor to Germany. Her mother had not seen her for five years. She also has a 12-year-old daughter living with friends in Bavaria.”

There is a great deal of mystery surrounding the release:

“The German government offered scant details on Monday after the foreign minister's sudden announcement on Sunday evening that Osthoff was in the safe custody of the German embassy in Baghdad after a three week hostage ordeal.

None of her relatives in Bavaria appeared to have talked to her by Monday morning. Osthoff's brother, Robert, told Reuters from his home near Munich that he understood she was at Baghdad airport heading for Germany, but had no official confirmation.

In fact, Osthoff, a convert to Islam who has lived in Iraq for over a decade, will not be rushing back to Germany.

"She wants to spend a few days with her daughter protected from the public and so will probably not immediately return to Germany," a foreign ministry spokesman said.”

This is the daughter who has been with relatives in Bavaria all this time, one assumes. Where is she going to spend this quality time with her mother?

There is also the mystery of the driver, who was also captured at the same time and who was supposed to be released together with Frau Osthoff. Apparently, he has not checked in.

But the biggest mystery of all is or, rather, was what did the German government give to get the lady out? Could there be a clue in an event that took place a few days previously?

As American blogger Debbie Schlussel reported yesterday, Germany took the decision to release Mohammad Ali Hamadi, one of the Hezbollah murderers of US Navy Diver Robert Dean Stethem. (I am sure our readers will recall the hijacking of TWA Flight 847 in June 1985 and the slow brutal murder of Mr Stethem, who refused to the last minute to apologize for being American. No doubt that was President Bush’s fault as well.)

“The German government captured Hamadi in 1987. (Stethem's other three murderers--Imad Fayez Mugniyeh, Hasan Izz-Al-Din, Ali Atwa--remain free, and are believed to be in Lebanon, Iran, or Syria.) Hamadi was carrying liquid explosives that were the same kind used in previous explosive terrorist attacks in France and Germany. Unfortunately, because Germany opposed our death penalty, Hamadi--who remains under indictment in the U.S.--was tried by the German government, not ours. He was given life in prison without the possibility of parole. But there was always an understanding that Hamadi would be extradited to the U.S. to face justice, if the Germans ever released him.”

Well, errm, no. Hamadi has been released and flown to Lebanon, where his family is heavily involved with Hezbollah . A day later Reuter’s picked up the story as well.

“Sources in Berlin and Beirut said earlier that Mohammad Ali Hammadi, convicted of killing Navy diver Robert Dean Stethem in Beirut during the 1985 hijacking of a TWA flight and sentenced to life in prison, was flown back to Lebanon last week.

German legal sources said he had been released on Thursday and travelled to the Lebanese capital on Friday. Hizbollah sources confirmed that Hammadi had returned.”

By a coincidence, just a few days before Frau Osthoff was mysteriously released in Iraq. And why did the Germans decide to release Hammadi despite previous agreements? Apparently, “He served his term”, according to the German justice ministry’s spokeswoman, Eva Schmierer.

And what of the American desire to try the man for murder?

“Schmierer said her ministry had never received a formal extradition request from Washington. But diplomats in Berlin said the German government was well aware that the Americans would have liked Hammadi extradited to the United States, where he is under indictment for Stethem's murder.

The diplomats said Hammadi's release could complicate relations between Germany and the United States, which have pledged to cooperate closely in anti-terrorism efforts.”

Were we not told by Angela Merkel that under her chancellorship German foreign policy and, in particular, relationship with the United States will be on a different footing? That’s question number one. And question number two has to be: what else has the German government given or promised for the release of Frau Osthoff (minus the driver), who has not the slightest intention of going back to Germany?