Hmm, things can't be that bad 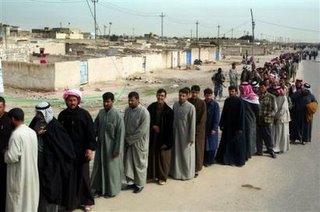 In Iraq that is. As for the coalition forces that are fighting to help the Iraqis to create a better and more free country, well, no words in the MSM can be bad enough for those, especially if they happen to be American.

But as far as the European Commission is concerned, the on-going elections are a cautiously positive sign. At least that must be the reason for its announcement that it intends to launch trade talks with the new government of Iraq next year and to open its first offices in Baghdad.

“Negotiations on the Trade and Cooperation Agreement mark the beginning of a closer cooperation between the EU and Iraq on trade and economic issues and will lead to strengthened ties between us.”

According to ISN Security Watch, the Benita Ferrero-Waldner, Commissioner in charge of foreign affairs announced after signing an agreement to open the office with Iraqi Ambassador Mohammed Jawad Al-Doreky:

“The two moves announced send a strong signal to the Iraqi population of Europe's intention to become increasingly engaged in Iraq and to continue playing a significant role in its transition. Together they represent a real step change in relations between the EU and Iraq as we progressively build up political dialog and lay foundations for a wider relationship.”