The boy-king of the Conservative Party 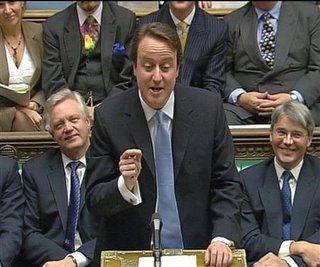 Some Tories are jumping up and down with excitement: they are seeing a Conservative victory in the next election, whenever that may be. Others and many on the right, who are not exactly members of the party, are feeling very glum, indeed. Even though David Cameron’s victory in the leadership election was a foregone conclusion with yesterday’s announcement more like an anointment, the thought of the boy-king as our best hope against a fourth Labour term, this time probably under the disastrously old-fashioned redistributionist Gordon Brown, does not fill one with joy.

What do we know about David Cameron? On the one hand, rather too much but on the other hand, nothing at all. We know about his education – Eton and Oxford – his lifestyle in Notting Hill, currently one of the most fashionable parts of London and in Gloucestershire, his wife, who is creative director of the elegant Bond Street stationer Smythson’s, his children – two in number, one of whom is disabled and a third on the way.

We do not know what his political views are. And that, many of us think, is a serious handicap (oooops, that word) for a political leader. The Conservatives in Britain and a number of writers in America have somehow accepted the myth that the problem with the party was not message itself but the way this was presented and interpreted in the media. Therefore, they reason, having a nice likeable young leader, who is full of the most up-to-date jargon about modernization (wot dat?) and compassion and who has lots of friends in the media, is bound to give the Conservatives an even break.

This rests on an entirely false premise. The reason the Conservatives did no better in the last election, despite the basic unpopularity of the government and distrust for the Prime Minister, is because when they spoke about their policies directly with no media misrepresentation, they did not say what people wanted to hear. And the person who was responsible for a rather feeble election manifesto that refused to promise tax cuts, a real shake-up in the public sector, smaller government and, above all, a complete rethinking about the European Union and Britain’s membership of it? Step forward David Cameron, MP for four years, one of Michael Howard’s closest adviser and a man who seems to be constitutionally unable to outline, in however general terms, a policy.

In 30 seats the number of votes by which the Conservatives lost was smaller than the number of votes that went to UKIP, Veritas, English Democrat Party, even the BNP. While it cannot be argued convincingly that the Tories would have won all those 30 seats if they had come up with stronger policies on Europe, education, law and order, taxation and immigration, they would have had between 20 and 25 of them. It was not the delivery that was wrong – it was the message.

Unfortunately, the Conservatives have refused to draw any kind of a lesson from that or from the fact that their vote having plummeted in 1997 and 2001, has not risen in 2005. Their concern seems to be to woo the Liberal-Democrat vote, for which David Cameron is an excellent choice.

He expresses no hard ideas, seems to have few real opinions and these tend to be of the discredited post-war statist, nay, socialist variety. He is also full of emotional touchy-feeliness, which sits oddly with his Etonian tones and carriage.

Read the rest of the posting on Albion's Seedling