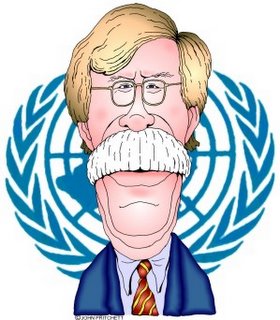 SecGen Kofi Annan (father of Kojo) is going to China. Nothing special in that. As Liu Jianchao, Chinese Foreign Ministry spokesman said:

“It will be Annan's seventh visit to China since he took office, and the two sides will exchange views on international and regional issues of common interest.”

The biggest international issue to be discussed is that nebulous UN reform, which SecGen Annan wants to put into action before the end of the year. Apart from the fact that the end of the year is not all that far away (hint: December has 31 days), it is also true that what the SecGen means by reform is not quite what others mean.

Annan appears to think that all he needs to do is to enlarge the Security Council, as he or his spokespersons quaintly put it, to reflect the post-Cold War world. Questions of accountability or financial probity, not to mention control of officials’ and troops’ behaviour, do not come into it.

The Chinese government is prepared to go along with this limited view of reform and is, in any case, unlikely to support any other. However, it is not prepared to accept the countries that are being proposed for a new, enlarged Security Council. In particular, China will not countenance Japan as a permanent member. As Liu Jianchao explained:

“China supports reform of the U.N. Security Council ... but priority should be given to increasing the representation of developing countries, especially African countries.”

Since many of those developing, African countries are the problem, this suggestion is not likely to go down very well with the United States or various other members, which is probably why the Chinese have made it. UN reform is not high on their list of priorities.

Unfortunately for those who prefer to stick to the status quo (most of those who work for the UN and its various agencies plus the various delegates and their staff), the United States does see it as a high priority. And it is not alone. As Frederick Kempe pointed out yesterday in the Wall Street Journal [unusually, available free],

“Some call what the U.S. is trying to achieve -- with significant support from other countries, notably Japan -- the GE-ization of the U.N., that is, introducing the modern management mechanisms of global companies. Together the U.S. and Japan provide more than 40% of U.N. funds (the U.S. 22% and Japan 19%). Among the leading opponents are Pakistan, Egypt and India.”

The key point there is the 40 per cent of UN funds (and that, one assumes, does not include the prime real estate in land-hungry Manhattan that the UN is squatting on). Congress wants to pass legislation that would withhold 50 per cent of American funding if the UN shows no sign of becoming more transparent or accountable.

The many recent scandals, culminating in the revelations of the oil-for-food scam have destroyed much of the UN’s credibility in so far as it had any. Those who oppose reforms, many of whom see it all as a sinister American plot not to have to pay for a tranzi organization that does its best bite the hand that feeds it, do not seem to realize that the UN in its present form is doomed, though, undoubtedly, its existence will be prolonged for some years more.

But can the UN be reformed? Mr Kempe sounds doubtful, though he is not a UN-basher by any means:

“The body that symbolizes the problem is also the source of much of the resistance to reform. Known as the Fifth Committee, it is the main council of the General Assembly responsible for administration and budgetary matters. It has 191 members and micromanages to a degree that it is nearly impossible for the secretary general to fire poor performers or shift resources between operations. Imagine a Western legislature having a committee that signs off not just on all expenditures but on each staff position in every mission. Management reform, if it is to work, would take much of that power and give it to a chief executive.

The most effective parts of the United Nations are funded voluntarily and aren't beholden to the Fifth Committee or the General Assembly. They include the United Nations Development program, the World Health Organization, the World Food program and UNICEF. Mr. Bolton has supported a shift of U.N. funding toward such voluntary activities, where competition for government funds with non-UN organizations has created more competitive, efficient organizations.”

[As it happens, the European Parliament manages to do quite a lot of signing off but, I suppose, it is not really a legislature in the accepted sense of the word. Then again, neither is the UN.]

Most of Mr Kempe’s article is about John Bolton, who has surprised everyone by not being the expected firebrand. Presumably, he does not eat other delegates for breakfast and this, according to Mr Kempe, shows a new, kindlier Mr Bolton. There is a reason for it, he thinks:

“While many diplomats search for Mr. Bolton's hidden motives in pushing this agenda, they've missed the most obvious: the Bush administration has realized at great pain via Iraq that it can't achieve much in the world without more effective multilateralism. The challenges increasingly defy unilateral solutions: terrorism, international crime, pandemic threats, global warming, nuclear proliferation.”

Since the UN has been singularly ineffective on all those scores and the US has managed to sign all sorts of bilateral and multilateral agreements, not to mention put together coalitions of the willing as in the post-tsunami weeks, it is not clear where Mr Kempe gets his certainties from.

Not from Mr Bolton, that’s for sure. John Bolton may have shown himself to be a hard-working, pragmatic diplomat (largely what he always was) but he has not changed too many of his opinions, as is clear from the quotations in the article:

“If we have a good story on reform, I'll tell it to the Hill. If we don't, I'm not going to spin it. What they know is that I am is a tough negotiator for U.S. positions.”

That is not so different from John Bolton saying that he is not there to represent the UN in the United States but the US in the United Nations.

Nor does he show himself to be all that optimistic about that famed reform, which is, according to Mr Kempe, being opposed on all sides in the organization:

“We're two months beyond the September summit and we are not making the kind of progress we would like.”

Very diplomatic. We are getting absolutely nowhere because the tranzis and free-loaders do not want to end the endless subsidies to the lifestyle they have become accustomed to, would be nearer the mark.

Meanwhile the American Enterprise Institute has published a Report Card from America: UN Reform by Newt Gingrich and George Mitchell. The first paragraph gives the background:

“We were co-chairmen of a bipartisan task force that was authorized by the U.S. Congress late last year to study ways to make the United Nations more effective. The group spanned a very wide range of political and ideological perspectives, and we couldn't agree on everything. But when we issued a consensus report in June, what was most striking was the extent to which we were able to find common ground, including our most important finding, which was ''the firm belief that an effective United Nations is in America's interests.''”

That does not mean what Mr Kempe says in his article. Clearly a strong UN that had no pretence to world government, that did not try to lay down some nebulous international law, that did not pander to dictators, that was accountable for the vast amounts of tax money it spends, that lived up to its own Charter and stayed within it, would be in America’s and many other countries’ interests. But it probably would not be the UN as it has developed over the fifty years of its existence.

The Report Card goes through a number of subjects: Human Rights and Genocide Prevention, Darfur, Human Rights, Management Reform and Catastrophic Terrorism. In each section it recommends a course of action for the US and the UN jointly, and on each point it sadly admits that little if anything has been done so far.

The final paragraph is considerably more emollient than anything Mr Bolton seems to have said but, as it happens, considerably less realistic:

“As others have said, UN reform is a process, not an event. Yet, it is reasonable to be concerned about the lack of progress at the September summit, which as the largest gathering of world leaders ever, provided a signal opportunity. It will continue to take concerted leadership by the United States, working with the world's other democracies, to help the United Nations meet the enduring goals of its Charter.”

It seems unlikely that SecGen Annan will discuss any of these matters with the Chinese leaders. Alas, it remains true that there is an impossible contradiction in the UN: the “enduring goals of its Charter” cannot be met by an organization most of whose members do not recognize those goals as being valid or necessary.