On losing a prime minister 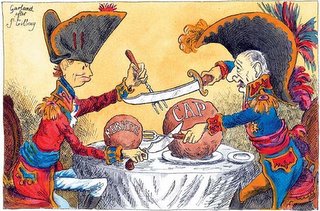 In one sense, there is very little left to say or write about the CAP that already hasn’t been said before, which is why, presumably, The Daily Telegraph got Ferdinand Mount to write about it in this morning's edition.

At least Mount follows in the wake of Charles Crawford, the British ambassador to Poland, who argued that we should ditch the CAP and give the money directly to needy countries. That is more than can be said for the dire Kaletsky in The Times yesterday, who wants us to give up the rebate without anything in return.

But if Kaletsky did have a point, it is that the battle of the rebate, and all that goes with it, has been a major distraction from the central issues that should be concerning Europe’s politicians. While they are squabbling over what – in the grander scheme of things – are trivia, all sorts of other more pressing issues are going by default. Giving up the rebate would allow us to concentrate on the important issues.

The nature of the battle is rather well illustrated by the Garland cartoon this morning, which is why it is politically impossible to take Kaletsky's advice, but the amount of energy wasted on the political equivalent of the Somme is well recalled by the Telegraph’s leader today. It reminds us of Tony Blair’s “glad confident morning” – the election manifesto on which the Labour Party rode to power in 1997, which called for urgent reform of the Common Agricultural Policy, describing it as costly, fraudulent and damaging to the environment.

Notes the leader, more than a little sombrely, "Eight and a half years on, in the twilight of his leadership, the CAP still accounts for about 40 percent of the European Union budget and his protestations about changing it have never sounded more futile."

"Rather than fulfilling his 1997 manifesto promise," it concludes, "Mr Blair has boxed himself into a corner in which the British rebate is excoriated while the cankerous CAP is left untouched. It is an astonishing fall for a man once regarded as a supreme political operator."

All good stuff, but while the politicians have fiddled, British agriculture has burned. The bald statistics tell their own story, with the 2004 Defra report cataloguing total farming incomes falling 5.4 percent, or 8.1 per cent in real terms, to £3.0 billion.

Total income from farming per full-time person equivalent fell by 4.7 percent in current prices, or 7.5 percent in real terms, to £14,800. Gross value-added for agriculture decreased by 0.6 percent and incomes were expected to have fallen for all farm types except dairy and specialist poultry. And all this at a time when food prices have risen by 11 percent since 1995 while prices of all items have risen by 25 percent.

If ever there was a snapshot of an industry in decline, this is it yet, since 1997, all Blair has been able to do is posture on a European stage without achieving anything of substance. That is the true measure of the failure of Blair but it is also a profound demonstration of the baleful effect of the European Union. Left to ourselves, the decline of the agricultural sector is something we could have addressed but as long as it requires a "European solution", nothing can be done.

And, despite all the drama and the acreage of newsprint that will emerge from today’s events at the European Council in Brussels, nothing will be done. We have lost a prime minister and gained a EUnuch.