What is she on? 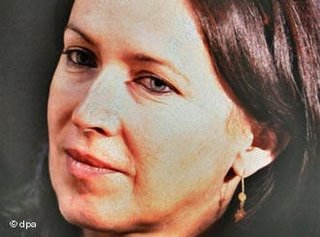 Susanne Osthoff, the German archaeologist who had been mysteriously kidnapped by an unknown group in Iraq and even more mysteriously released a little while ago, has been telling the world about her deep respect for her kidnappers. This could be an extreme case of Stockholm syndrome or she might be taking something apart from Arabic coffee.

It seems that she has been described as being deeply knowledgeable about the country, which is why she did not leave, even though she was aware of the dangers. This deep knowledge has not prevented her from coming up with gems like this on Al-Jazeera:

“"Do not be afraid. We do not harm women or children and you are a Muslim," she quoted them as saying.

"I was so happy to know that I had not fallen into the hands of criminals," she said.”

Well, I am happy that she is happy. But how did she know that this was not one of the groups that had planted, at various times, explosive-filled vans by lines of children who were being given sweets or beside markets where women with their children were shopping? How well does she know Iraq if she believes that these groups do not harm women and children?

It seems that all her kidnappers wanted was humanitarian aid to the Sunni Arabs in the Sunni triangle north-west of Baghdad and thought Germany would be able to provide them with schools and hospitals. As they don’t seem to have made this plea public, it is hard to see how they were going to achieve their aim.

But, really, Ms Osthoff cannot blame them for kidnapping them. They are very poor, after all, and “they cannot enter (Baghdad’s heavily fortified) Green Zone to kidnap Americans”. Sheesh. Those Yanks! They don’t think of other people at all. Fancy fortifying the Green Zone to such an extent that no kidnapping becomes possible.

Meanwhile, a few questions have not been answered. One is whatever happened to the driver. Was he involved in the kidnapping? If not, where is he?

Then there is the daughter, who, last heard of, had been parked with relatives on a permanent basis in Bavaria. Presumably that arrangement will go on.

Most of all, however, one would like to know what the whole episode was about. Let us discard the nonsense about schools and hospitals – no archaeologist is worth that much. Ms Ostroff maintains that the Berlin government had made no contact with her kidnappers, which shocks her rather. She also maintains that she was “sold”, without specifying by whom and to whom.

Meanwhile, there is news, mentioned by one of our readers, of an unknown group who had kidnapped a French engineer early in December and is demanding an end to the “illegal French presence” in the country and an immediate withdrawal of French troops. Either they have better information than the rest of the world does, or they are seriously confused.