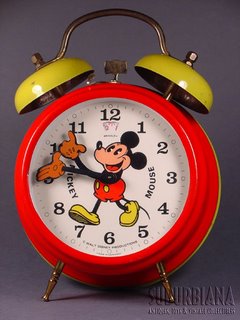 The idea of Blair walking into the European Council next week with a particularly naff kiddies alarm clock, and giving the "colleagues" an hour to reach a decision on the EU budget, is enormously appealing.

It certainly appealed to Charles Crawford, our man in Warsaw who, according to The Sunday Times has committed the unpardonable sin of telling the truth about our European Union "partners", blaming them for farm subsidies that "bloat" rich French landowners, "pump up food prices" and create poverty in Africa.

This is in an e-mail to colleagues, obtained by The Sunday Times, where he suggests Blair sets an ultimatum to "mes chers amis" and then presses the button on alarm clock, leaving a silence broken only by loud ticking. Helpfully, Crawford adds that he has a suitable alarm clock.

In the Crawford scenario, if the deal is not accepted, Britain would be able to walk away with its rebate intact. It would then be able to use money that it was prepared to deduct from its rebate to fund projects directly in former eastern bloc countries.

Crawford estimates that it would be equivalent to twice as much spent through the EU and that Britain’s help would go much further, faster and more efficiently to the countries concerned. There will not be the loss of money in "all the bollocky EU bureaucracy" and "sticky transaction costs, local and Brussels corruption, overheads and other rubbish".

Unfortunately, the e-mail is put down to Crawford's "off-beat sense of humour", and is not being treated seriously, other than as an indication of the intense sense of frustration being engendered by the obdurate "colleagues". But, just for once, it seems that at least one Foreign Office official is in tune with popular sentiment. His note is headed: "Loosen those EU budget talks — let's end the misery!"